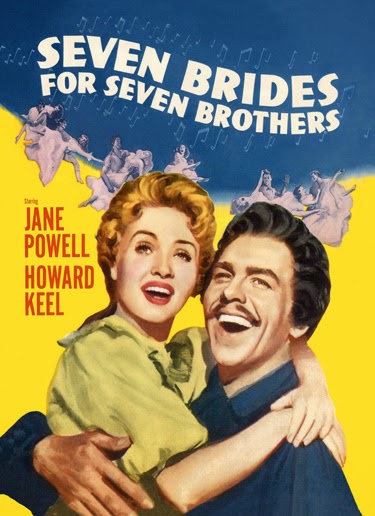 Nostalgia-fests for this blog have covered The Lion King and The Shadow's 20th anniversaries and The Muppets Take Manhattan's 30th. Today I want to jump back even further, because today is the 60th anniversary of Stanley Donen's 1954 musical Seven Brides for Seven Brothers.

We tend not to talk about Seven Brides too much these days, probably because it's based on a fairly repellent premise: a farmer comes down from the mountain into town and finds himself a wife. His six brothers then kidnap another six women and hold them hostage over winter until Stockholm syndrome runs in course and all the women fall hopelessly in love. On the other hand the film's got a nice line in hummable songs and at least one stand-out dance sequence. What's a musical lover to do?

As always the key to enjoying Seven Brides is context: its premise is unsettling to us today, but in 1954 it was considered harmless fun. The film was a big hit for MGM at the time, far more so than their intended prestige musical for that year - Vincente Minnelli's comparatively sterile Brigadoon. Seven Brides even lost some of its budget to Brigadoon mid-shoot, so it must have been satisfying for Stanley Donen and his crew to see Seven Brides become one of the year's biggest hits and win an Oscar while Brigadoon lost a truckload of money.

In the early 1950s the MGM musical was one of the best bets for entertainment in Hollywood. Seven Brides forms part of a string of critical and commercial hits, including Royal Wedding (1951), An American in Paris (1951) and Singin' in the Rain (1952). Even less successful films such as It's Always Fair Weather (1955) remain tremendously entertaining and fun to watch. This is the case with Seven Brides for Seven Brothers. The barn-raising dance in particular is one of the best musical numbers ever filmed, and makes the film a must-see even 60 years on. It was choreographed by Michael Kidd, who wisely insisted that as many of the brothers as possible should be dancers rather than actors - on the fairly sensible grounds that it would be easier to teach a dancer to act sufficiently in a musical than to teach an actor to dance.

The film stars Howard Keel as Adam, the eldest of the Pontipee brothers. I've always found it interesting that, while other musical stars like Bing Crosby, Fred Astaire and Gene Kelly remain famous to this day, Keel has slipped somewhat into obscurity. He has a strong screen presence and great comic timing and it's a shame he hasn't remained more popular. I suspect it's a case of the films he was cast in: Singin' in the Rain works very well with an audience today, whereas Seven Brides, Show Boat and Kiss Me Kate simply don't have as much appeal.

Jane Powell plays his new wife Milly. She's a great actor, but has one of those singing voices at the exact pitch and vibrato to set my teeth on edge. As a result she's a bit of a mixed experience, although certainly the good vastly outweighs the bad. The supporting cast is filled with comparative unknowns, although it's possible to spot Julie Newmar (Batman) among the six extra brides and Russ Tamblyn (West Side Story) among the brothers.

It may be 60 years old, and its gender politics may be disastrously inappropriate (the film is based on a novel titled The Sobbin' Women, which is a pretty good indication of the territory), but it would be a shame to write off Seven Brides for Seven Brothers. It's bright, insanely colourful, filled with inventive and athletic dance routines and, by virtue of its age, is so unintentionally camp at times that it feels positively transgressive.
Posted by Grant at 6:33 PM