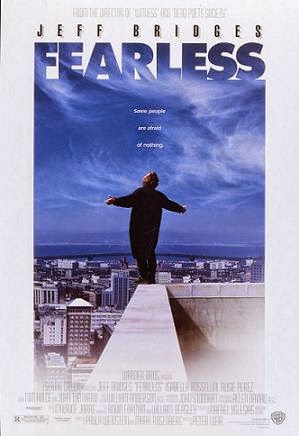 The other day I reviewed Dead Poets Society, a 1989 drama directed by Peter Weir. It was four years before Weir directed another film, but I personally think it was worth the wait. Fearless (1993) focuses on the aftermath of a horrific passenger jet crash, specifically on the effect it has on architect Max Klein (Jeff Bridges), who walks freely from the crash site but whose life gradually falls apart over the following weeks and months.

It's a beautifully structured film, because while the entire story follows from the crash we actually begin after the plane has hit the ground. It's entirely about repercussions, and Weir deliberately avoids showing us anything that is going to sensationalise what has occurred. Instead he focuses entirely on character - not just Max but also his wife Laura (Isabella Rossellini) and fellow survivor Carla (Rosie Perez), whose infant son did not survive the crash.

It feels redundant to say that Jeff Bridges is exceptional as Max, since he's always been one of America's best screen actors. He plays multiple layers of Max throughout the film: he feels invincible, having survived the unsurvivable, but at the same time there are little darts and flashes throughout that show off how damaged he actually is. The film benefits enormously from Bridges' performance, because Max says and does many things that could render him as unlikeable to an audience - Bridges ensures we stay on side through his emotional journey.

Rosie Perez pretty much brings the best performance of her career here. I don't have children. I can't fully imagine what it would be like to survive a disaster like Carla yet lose my child. What little I can imagine is pretty much how Perez plays it here. It's a heartfelt, devastated performance that rightfully earned her an Oscar nomination (although she lost the award to Anna Paquin).

This is a beautifully observed character study, showing how two people cope with tragedy in very different ways, and the effects - both good and bad - that their recovery has on the people around them. Like Dead Poets Society, it's a drama, but the similarities pretty much end right there. The former film was filled with such hope, and brought that hope crashing down in its final act. The opposite occurs here: this is a film filled with such well-presented grief and sadness, but one which overflows with love and compassion by its end.
Posted by Grant at 9:35 AM