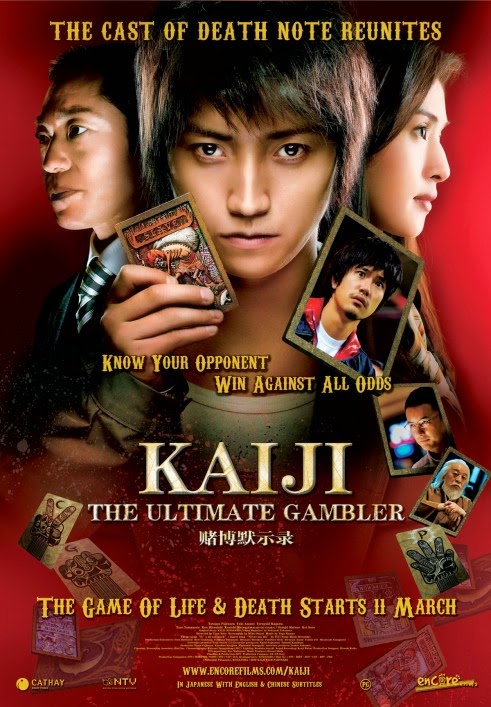 Kaiji Ito (Tatsuya Fujiwara) is a listless 30 year-old compulsive gambler. When a friend whose loan Kaiji promised to guarantee skips his payments, Kaiji finds himself confronted by a local loan shark and given two choices: pay up the millions of yen in debt and interest, or take his chances on a high stakes card game on a cruise liner. When that escapade fails Kaiji finds himself forced into indentured service building a vast underground city - with only one chance to make it out.

Kaiji: The Ultimate Gambler is one of a wide array of live-action adaptations of popular manga. In this case it adapts Fukumoto Nobuyuki's Ultimate Survivor Kaiji, a long-running serial that's been published off and on since 1996. It joins other live-action films of recent years including Bunny Drop, Rurouni Kenshin, Death Note (which shares much of this film's cast) and several others. I think it's important to remember that the film is adapted from a manga, because taken on its own merits it's ridiculously unbelievable, emotionally over-the-top and utterly silly.

The film does have some interesting things to say about perceptions of wealth. On the one hand, all of the rich people in the film are positively diabolical, forcing debt-ridden poor people to risk their lives and die for their own amusement. On the other hand, it also seems to argue that poor people will always be poor, because they waste their lives waiting for the one big break rather than actually work to pull themselves out of poverty. I'm not certain either accusation is true, and it creates a rather strange film. The villains are irredeemably corrupt, and the heroes are pathetic and incompetent. Who am I supposed to care about?

Tatsuya Fujiawara plays Kaiji. He's an odd actor. I've seen him in numerous films, notably Kinji Fukasaku's excellent Battle Royale, and he's always seemed to operate in one of two modes. It's like there's a switch on his back: flick it left, and you get sullen moping, flick it right, and you get screaming histrionics. He doesn't seem to have a range in between. This actually serves him well in this film, since he is for all intents and purposes playing a cartoon character.

All that said, I can't deny that some of the scenes - generally ones involving card games - are very well shot, and hilariously over-the-top. I've never read the manga, but based on the film I assume it devotes a lot of pages to each character's rationale behind playing a particular card. Certainly the film spends a bizarre amount of time explaining it. It's awful, but also weirdly addictive.

I don't know how to properly describe this movie. I think it's pretty ropey, but at the same time I found myself insatiably curious to know what happened next. For that reason alone there has to be something of worth here.
Posted by Grant at 7:21 AM