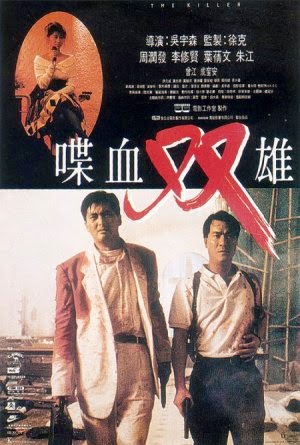 On this day, 25 years ago, John Woo's acclaimed action thriller The Killer was released in cinemas throughout Hong Kong. It's a pretty legendary film, earning widespread international plaudits as well as being a massive hit in its home market. It was also pretty much the creative peak for an entire generation of Hong Kong filmmakers: it wasn't the first of John Woo's 'heroic bloodshed' thrillers, since it followed on from A Better Tomorrow, and it wasn't his final word on the genre, since it was followed by Hard Boiled. It is, however, the best of his films. I honestly don't think he's topped it.

Cinema in Hong Kong was pretty shaky by the late 1970s. The enormous craze for kung fu films had kind of died down, and there wasn't a lot being produced that could challenge the popularity of foreign imports (mainly from the USA). The 1980s saw a renaissance in the industry though, and it was pretty much driven by three things. First of all there was a shift from performing films in Mandarin Chinese to Cantonese, which was the language actually spoken by the majority of people in Hong Kong. Secondly there was the rapid ascension of Jackie Chan as an action star, director and producer. Thirdly, there was John Woo and his crime movie directing colleagues. Jackie Chan we'll leave for another day: let's talk Woo.

Woo had already been working in Hong Kong movies for years by the time he finally made his big break with A Better Tomorrow in 1986. It was his 18th film, although it made such an impact internationally that you would be forgiven for thinking it was his first. A Better Tomorrow was an ultra-violent crime story starring Chow Yun-Fat, a soap opera actor just shifting into feature films. It revolutionised action cinema worldwide through a combination of slow motion footage, Mexican stand-offs, gangsters blazing away with a semi-automatic in each hand, and overwrought scenes of brotherly love, wounded masculinity and - intentionally or not - bucketloads of tense homo-eroticism. Chow Yun-Fat became an international megastar. Its producer Tsui Hark - a successful director in his own right - made a bucketload of money. Hong Kong cinema was, without exaggeration, never the same again. You can still see the influence of A Better Tomorrow rippling through Hong Kong cinema today: maybe in a more subtle and sophisticated fashion, but you don't get the works of Johnnie To, Andrew Lau, Felix Chong, Alan Mak, et al, without going through John Woo first.

The success of A Better Tomorrow led to a sequel within a year, but it was in 1989 that Woo wrote and directed The Killer. While A Better Tomorrow II was essentially a duplicate of the original, The Killer was an evolution of it. The stylistic techniques of A Better Tomorrow returned, but they had been carefully refined. There was a greater nuance to the piece, and a stunning central performance by Chow as the titular professional assassin. The film focuses on fewer characters - basically Chow's hitman, Danny Lee as the cop attempting to arrest him, and Sally Yeh as a lounge singer accidentally blinded by one of Chow's hits. This allows it to develop each character in more depth, and create a more satisfying movie.

It was an enormously influential movie, echoed in such works as Luc Besson's Leon (aka The Professional), Robert Rodriguez's El Mariachi and Desperado, and Johnnie To's Running Out of Time. Hong Kong cinema entered the 1980s a sad shadow of its former glory, but it ended the decade on top of the world. The Killer is, in essence, the climax of that journey, and it's still one of the best movies I've ever seen.

So happy birthday to The Killer: 25 years old today.

This has been the third in what seems to be turning into a weekly series of posts waxing nostalgically about movies that have celebrated one anniversary or another. Previous posts have remembered The Lion King and The Shadow on the occasion of their 20th anniversaries.
Posted by Grant at 5:00 PM