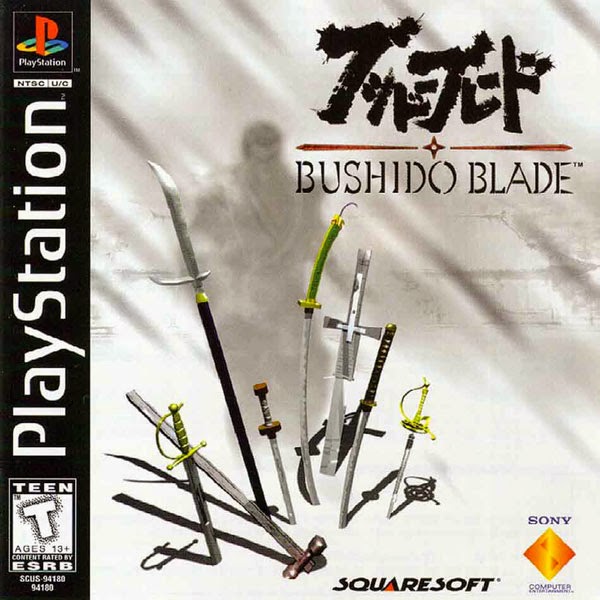 Bushido Blade is a fighting game that was published by SquareSoft in 1997. It allows players to engage in one-on-one sword duels using an array of traditional Japanese bladed weapons. There is also a single-player narrative, but as with most fighting games it's the multiplayer part of the game that is the most satisfying.

And it is so satisfying.Bushido Blade is a stunning videogame. It brings an unexpected brutal realism to the genre. While competitors like Soul Edge featured long brawls and extensive trading of blows, a round of Bushido Blade can be won by hitting a single button on the controller. The trick is in knowing which button, and exactly when to press it.

This is pretty much the only fighting game I've ever played where the deadly weapons your character is armed with are actually deadly. It's very easy to strike once and kill your opponent outright. The challenge comes from the fact that they can instantly kill you as well. Instead of frantic button-mashing, Bushido Blade is one by patience and discipline. You want to draw your opponent into range without leaving yourself open to attack. Timing is critical, and I've played games that seemed to last forever, simply because neither player had sucked up the nerve to actually have a go and strike.

The graphics are fairly basic, but they do their job and the collision detection is ruthlessly fair. There is a stark simplicity to Bushido Blade: the weapons are so deadly that there's no point in a health bar - neither is there an arbitrary time limit. A duel takes as long as it takes.

Of course if you're skilled at the game, and your opponent is not, it's possible to be remarkably cruel. Strike their arm and they'll stagger. Strike their leg and they'll limp. Strike both legs and they'll crawl, almost completely incapacitated but still capable of taking you out if you get too cocky.

A sequel followed in 1998, but it was crippled by changes to the control mechanism and is nowhere near as accomplished. A 'spiritual sequel', Kengo, was released for the PlayStation 2, but it likewise was nowhere near as playable or efficient as the original.
Posted by Grant at 4:55 PM