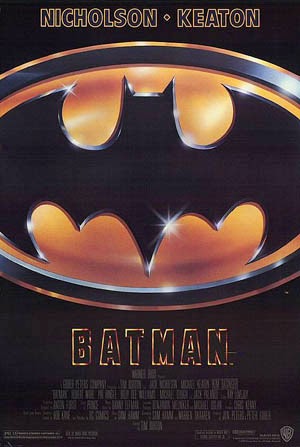 Tim Burton's 1989 film adaptation of Batman turned 25 recently, and this inspired me to give it and its three sequels a rewatch. It's been about three years since I last watched both Batman and Batman Returns, thanks to a brilliant Tim Burton retrospective at Melbourne's ACMI (Australian Centre for the Moving Image). It's certainly been longer than that since I've rewatched Joel Schumacher's Batman Forever and Batman & Robin. Let's have a look at all four, one by one, to see how they stand up, and how they fare as both films in their own right and as adaptations of the Batman comics.

In crime-ridden Gotham City, ageing crime boss Carl Grissom (Jack Palance) uses a corrupt police sting to take out his untrustworth lieutenant Jack Napier (Jack Nicholson). When the sting coincides with a strike by the mysterious Batman (Michael Keaton), Napier finds himself shot in the face and dropped in a toxic vat of chemicals. He emerges as the Joker, a self-professed "fully-fledged homicidal artist" with plans to kill millions of Gotham's citizens and a romantic eye on photojournalist Vicki Vale (Kim Basinger).

I actually struggled to write a functional synopsis of Batman, and straight away that reveals one of the film's biggest problems. It uses a screenplay that has been through numerous iterations and revisions, and it feels as if no effort was made to go back in and tidy the final script into a cohesive whole. The result is a story that makes less sense the more that you think about it. Now to a certain extent a Hollywood blockbuster can paper over script faults with explosions and gunfights, but as a film ages (and this film, at 25, is really showing it) those faults become more and more apparent. I was swept away by Batman as a 13 year-old; as a 37 year-old I find myself considerably more critical.

Not that the script is all bad. Batman kicks off a few months into Bruce Wayne's tenure as Gotham City's masked crime fighter. That's actually a relief. The 25 years since this film came out have seen so many superhero-based films kick off with a lengthy origin story, one that more often than not fills the movie's entire running time. That isn't the case here. Instead we are introduced to the characters and the main story first, and it's photographer Vicki Vale and journalist Alexander Knox (Robert Wuhl) who actually do the research and work out the origin once the movie's well on its way. It's a more organic way to tell the story, and it gives the characters productive things to do as well.

I remember that when this film was released, it was heralded as a new dark, ominous take on the Batman mythos, and was presented in sharp contrast to the popular TV series of the 1960s. It's funny how the further into the past Burton's Batman goes, the closer it feels to the Adam West TV series. There's a lot of levity and silliness to the film, a lot of which works rather well, but most of it does kind of work against this idea that it's a grim, mean version of the character.

Michael Keaton plays the dual role of Bruce Wayne and Batman. He was a controversial choice at the time, but generally seemed to impress audiences once given the chance. I've always been a fan: he manages to straddle the very difficult line between being serious and down-to-Earth, and at the same time believable as a billionaire who dresses up in rubber and beats up criminals for kicks. He's exceptionally good as Wayne, managing to come across as a very different persona to Batman without resorting to "foolish playboy" cliches.

Jack Nicholson dominates the film as the Joker, but then that's kind of the point of the character. He's all aggressive noise and violence, crowding the foreground while Batman lurks in the shadows. His performance seems to have gone through a weird change of esteem: at the time he was considered the best thing in the movie, and as Heath Ledger was cast in the role for Christopher Nolan's The Dark Knight (2008), many sofa critics seemed intent that Ledger could never match the brilliance of Nicholson's performance. Nowadays, however, it seems people have gone off Nicholson's version. I still like it: he cleverly blends the portrayal of Napier and the Joker, so that you can see the germ of the latter in the former and the remains of the former in the latter. Of course the Joker's plan is all over the place - first try to murder millions with contaminated beauty products, then invite them all to a street party to gas them to death - but that's the script's fault and nothing to do with Nicholson.

It's actually Bob (Tracey Walter) that I like the most. He never gets a surname, but he's established as a right-hand man to Jack Napier and when Napier returns as the Joker Bob doesn't even bat an eyelid. He helps out in his insane schemes, photographs his crimes for him and assists in attempts to woo Vicki Vale. There's something about the character's puppy-esque desire to please that appeals to me, and I notice him every time I watch the film. It's only his failure to pre-warn the Joker that Batman has a plane that gets him shot in the end. Poor, faithful Bob.

Kim Basinger is solid as Vicki Vale, particularly when you discover that she pretty much dropped into the film without any preparation or rehearsal: original Vicki Sean Young broke her ankle on a horse-riding mishap and Basinger was hired in her place. Michael Gough plays Alfred as an older and kinder sort of butler than I'm used to from the comic, while Pat Hingle is a fairly ordinary and unexceptional Commissioner Gordon: there's no character here for him to play, just a bunch of lines to push the plot forward.

The aesthetic of this film trapped somewhere between a generic studio picture and the very stylised look of Burton's future films. That makes sense: this was Burton's third feature, and his first big-budget studio blockbuster, so it's understandable that Warner Bros kept him one a reasonably tight leash. It's composer Danny Elfman who flies out of the gate, producing a bombastic and intricate score that pretty much defines his musical output for the next decade and a half.

All up it's an enjoyable film to rewatch, but I can't help but feel that there's a lot of nostalgia at work here. The script is, as I've mentioned, all over the place, but it does achieve a distinctive tone, and it's performed by a generally strong cast. It also does manage to overcome the enormous hurdle of getting audiences to move beyond the 1960s TV series and accept Batman in a different style. So not a great film, but a good one and a necessary one as well.

One element of the film I did want to note is its marketing: Batman represented a significant step in Hollywood filmmaking, in that Warner Bros' exceptional marketing campaign managed to sell the film based on a concept rather than simply on its story and its cast. In the northern hemisphere summer of 1989 that black and yellow Batman logo was everywhere, and the film gained an enormous amount of traction purely from that one image. It led to a change in the way Hollywood developed its summer blockbusters: no longer with a story or a cast, but with an identity.

The proof of its success is in just how well this film performed. The summer of 1989 was extraordinarily competitive, with Batman competing against such films as Indiana Jones and the Last Crusade, Ghostbusters II, Lethal Weapon 2, Honey I Shrunk the Kids, The Karate Kid Part III, License to Kill, Turner and Hooch, The Abyss, Parenthood and many others. Batman came second worldwide ($411m), only beaten by Indiana Jones ($474m).
Posted by Grant at 7:25 PM