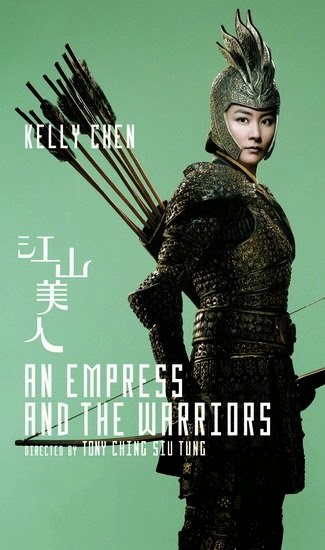 An Empress and the Warriors, directed by Ching Siu-Tung and starring Kelly Chen, Donnie Yen, and Leon Lai, is a romantic action epic set in ancient China. A princess named Yen Feier (Chen) inherits a kingdom when her father is murdered. When an attempt is made on her life she is rescued by a handsome monk (Lai), and recuperates with him deep in the forest. They fall in love, Yen abdicates her crown, and then she is forced to return when politics back home spill into a bloody civil war.

Ching Siu-Tung is best known as the director of the Chinese Ghost Story trilogy. He shoots a very pretty film here. The forest vistas are gorgeous, and the film draws a lot of mileage from the Chinese countryside. Coupled with this is some fantastic costume design – much of the armour in particular is beautifully elaborate. The actors are all good, and generally do what they're best at - Donnie Yen in particular is impressive, and gets a wonderful fight scene towards the film’s climax. Ultimately, however, there’s nothing here to make me want to recommend it too heavily. It’s one of those films that is just there. It does nothing wrong, but doesn't do enough that is exceptionally right.

If you like Chinese historical melodramas with the odd swordfight you will probably watch An Empress and the Warriors with or without my recommendation; indeed it's been out for six years at the time of writing, so you may have seen it already. I think part of my disappointment comes from how much the film fails Alison Bechdel’s now famous rule of movies, in which a film is worth watching if it has at least one conversation between two women about something other than a man. An Empress and the Warriors only has one woman in it, so it was kind of screwed on that level from the outset.

There is so much failed promise in Yen Feier. The film’s poster shows Kelly Chen decked out in a beautiful suit of armour, sword in hand, and while the relevant scene does crop up in the film, it feels like a case of too little too late. The film tries to straddle a line between being a gentle romance and being an action epic, and it isn’t a long enough film or a sophisticated enough story to be both. As a result, both sides of the story feel a little short-changed.

Hong Kong and Chinese cinema has a great history of exceptional female action stars and vehicles -Crouching Tiger Hidden Dragon, The Bride with White Hair, The Heroic Trio, and so on. It is a deep shame that Kelly Chen wasn't allowed to fully become one of them.
Posted by Grant at 5:14 PM