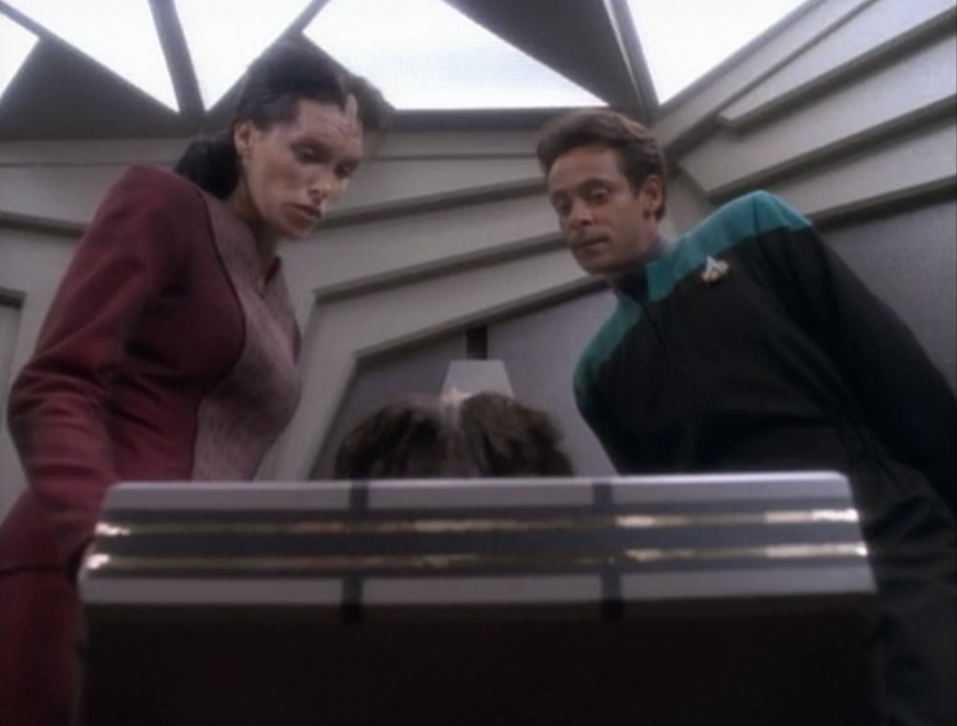 While en route to the station, Major Kira and Dr Bashir intercept a damaged Kobliad freighter. Onboard they find a security guard, Ty Kajada, and her dying prisoner, Rao Vantika. Despite Vantika's death, on arrival at Deep Space Nine Kajada insists her prisoner may still be alive. Has Vantika somehow faked his own death, and transferred his consciousness into someone else's body?

Here we go again: great concept, dreadful execution. This was originally a really cool concept for an episode of Star Trek, with a police officer trying to hunt down a vanished criminal only to learn that the criminal is actually hiding inside their own mind. It brings to mind all manner of Philip K. Dick novels and stories, and could have been a wonderfully twisted story rich with paranoia. The problem of course is that it would have been based around the guest star, with the regular cast relegated to supporting roles. That makes a certain amount of sense, and there's another good episode to be made here where we don't know which of the station command crew has been secretly possessed.

Except we do know, because for reasons known only to its creators "The Passenger" flat-out tells us within two minutes of the episode starting.

Immediately before he dies, Vantika grabs Bashir around the neck and whispers 'make me live' in that way that makes it ridiculously obvious. About 20 minutes later Quark is apprehended in his bar by whoever Vantika is controlling. We never see their face, but sadly we do clearly hear Alexander Siddig's voice for the entire conversation. By the time the episode makes the shocking revelation that Vantika is alive, and his consciousness is living inside GASP Dr Bashir, I'm pretty sure most of the audience will be drumming their fingers and failing to care.

And it has to be said that Siddig's performance as Vantika is shockingly bad. I'm a fan of his acting. I've seen him in a bunch of things outside of Deep Space Nine and liked him immensely in all of them. His performance as Vantika is so weirdly eye-bulging and wooden that I can only assume he was doing it on direct instruction from episode director Paul Lynch. Why Lynch suggested it eludes me.

One better element is the episode's introduction of Starfleet security specialist Lt George Primmin. The character, played well by James Lashly, was introduced because Colm Meaney's contract allowed him to regularly leave the series to perform movie roles. This is the second episode in a row without Miles O'Brien, so it was figured Primmin could pop in and out of the series to cover for Meaney's absence. It's a fair enough idea, although does bring to mind weird Clark Kent/Superman scenarios where crewmates wonder why Primmin and O'Brien are never seen at the same time. For whatever reason Primmin didn't take - he only appears once more and then vanishes. The idea has merit though, because it gives a character for Odo to butt heads with, and the series will revist the concept in Season 3.

The episode's denoument is rather shocking. Bashir's been recovered, and Vantika's consciousness placed inside an electronic device. Kajada takes custody of her "prisoner", places the device on a table and promptly shoots it cold dead. I'm not sure of the minutiae of Starfleet law, but I'm pretty sure murdering a guy in the control room of the station is illegal. Sisko looks shocked. Bashir and Dax look bored. I know how they felt.

This is turning into a bit of an unfortunate run of underwhelming episodes. Hopefully it'll break soon. As it stands we've had eight episodes with five good ones. That drags the quality ratio down to 63%.
Posted by Grant at 6:43 PM