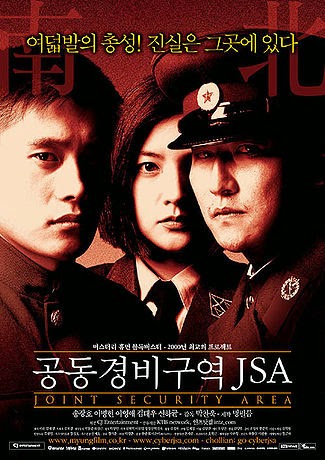 Park Chan-wook remains one of South Korea’s most acclaimed directors – and deservedly so. JSA: Joint Security Area would seem almost inarguably to be one of his best works.

A shooting has occurred across the demilitarised zone that separates North and South Korea. With both nations on high alert, an investigative team is dispatched on behalf of the United Nations. They are ordered to interview those soldiers involved and establish exactly what transpired that led to the fatal event. The diverging accounts, and the truth behind what happened at the titular “joint security area”, form the basis of this exceptional, unexpectedly human drama.

It is easy to fall into the assumption that there are two Koreas – the pro-US, democratic South and the anti-US, militaristic North. Korea is, culturally at least, still the one nation. Families and friends are separated across seemingly arbitrary border. The Korean War never actually ended – there was a cease-fire, but certainly no formal declarations or treaties exist. The demilitarised zone between the two Koreas remains a tense, rigorously monitored and patrolled border, and as such makes for a remarkable setting for a motion picture. It gives JSA an edge, as well as political machinations, the military and a constant sense of urgency.

Park uses this setting wonderfully to create what is effectively a contemporary re-telling of Akira Kurosawa’s legendary film Rashomon. There has been a shooting across the border. A soldier is dead. Everybody involved in the incident seems to have a slightly different story to tell. Weaving through the resulting series of interlocked but inconsistent flashbacks is half of the fun in this film.

I say half, because there is another aspect to this film, which is a deeply human one. For all of its military thriller trappings, JSA is at its heart a quite profound story about friendship and human kindness. I can’t help but feel that Hollywood versions of the Rashomon format (such as Basic, for example) would simply go for the twists and turns of the plot and ignore character and depth entirely. Thankfully Park is a more interesting filmmaker than that, and he gives the military thriller an unexpected but deeply rewarding emotional core.

Two standouts among the cast are Lee Byung-hun and Song Kang-ho. They each play a soldier from a different side of the demilitarised zone, and whose encounter drives the entire narrative of the film. Lee is now better known to English-language audiences for Hollywood productions like G.I. Joe, but he's carved a huge career for himself in Korea with films like The Good, the Bad and the Weird and I Saw the Devil. Song is of course a veteran performer from films like The Host, Snowpiercer and Memories of Murder - this is one of the best things he's done.

It has been quite a few years since JSA was released, but it still retains as much power and heart as when it was first screened in cinemas. For viewers and fans of South Korean cinema, it remains a must-see classic. If you're not that familiar with Korean films, trust me that this is one of the absolute best ones.
Posted by Grant at 9:13 AM