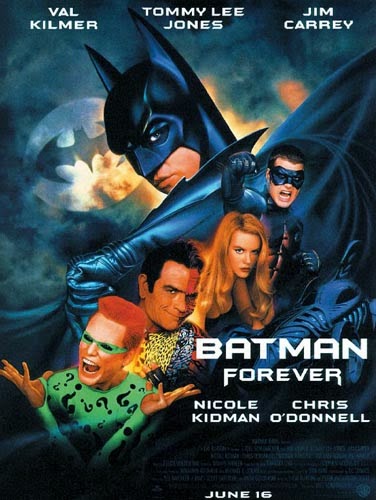 When 1992's Batman Returns only managed to gross $266m worldwide in comparison to Batman's $411m, Warner Bros looked to reinvigorate the franchise with a new look and a new director. Tim Burton was awkwardly eased out of the director's chair and Joel Schumacher was installed in his place. Despite being relatively amicable according to all concerned, the transition was somewhat problematic: Burton's Batman 3 was already in development and several actors had already been cast. Schumacher, then, was placed in an unenviable task: continuing development and production of a movie already underway, and juggling the triple challenge of continuing Burton's franchise, finding an authorial voice of his own, and pleasing Warner Bros - who, more than anything else, wanted a Batman movie that could be sold to merchandisers and sponsors en masse.

Sometime after the events of Batman Returns, Batman (Val Kilmer) must fight against the deranged former district attorney Harvey Dent (Tommy Lee Jones), who has escaped from Arkham Asylum on a mission to murder Batman. This task is complicated by the rise of the Riddler (Jim Carrey), a new Gotham-based villain, the amorous attentions of psychologist Chase Meridian (Nicole Kidman), and the addition of orphaned acrobat Dick Grayson (Chris O'Donnell) to Wayne Manor.

Let's look at the casting of the film first, particularly since when people discuss Batman Forever they often dwell on the actors. Michael Keaton jumped ship soon after Tim Burton left: at the time Warner Bros tried to paint it as a pay dispute, but in retrospect it's pretty clear that he was uncomfortable with the idea of revisiting a role for a third time and wasn't keen to do it without Tim Burton directing. Joel Schumacher recast the Bruce Wayne/Batman role with Val Kilmer based on his performance in Tombstone. Kilmer gives a strange, soft-spoken performance in Batman Forever, treating the material with arch seriousness. I can't decide if he genuinely thought he was in a serious film, or if he's quietly mocking the material. I suspect the latter. For me this earnest version of Batman fails in comparison to Michael Keaton's two outings, although I wouldn't be surprised if others really liked it.

Rene Russo had already been cast as Dr Chase Meridian by the time Tim Burton moved on. Executives at Warner Bros felt that she played "too old" opposite Kilmer, however, so she was paid out of her contract and replaced with 27 year-old Nicole Kidman. At the time Russo was 40. Kilmer was 35. I am not overly fond of Nicole Kidman's acting. She has delivered some outstanding performances throughout her career, in films like Dead Calm, The Hours and The Others, but she's also regularly delivered some appalling ones. She's not very good here, but then it's hard to see what any actor would have done with the role as presented on screen, since she seems to do nothing but spout pop psychology and chat up Batman while wearing slinky bedclothes.

Chris O'Donnell plays Dick Grayson, who during the course of the film joins Batman as the world's most famous sidekick Robin. This casting necessitated another payout, since Marlon Wayans had already been contracted in the role first for Batman Returns and then (when rewrites took Robin out of that movie) to Forever. O'Donnell is actually rather good, and certainly engages in the role with enthusiasm. Attempts to give the character an edge, including riding motorbikes, wearing an earring and glowering defiantly at Bruce all give him a very homo-erotic edge, something excarbated once he and Kilmer are both wearing rubber suits with enormous codpieces and infamous bat-nipples.

There's a strong fetishistic edge that runs right along Batman Forever. It's an edge that was always there in the franchise - it's kind of avoidable when your characters are running around in combinations of black rubber and vinyl - but Schumacher turns the dial up as far as he can. It's not just the batsuits: Two-Face's goons have extensive facial piercings and gimp masks, Jim Carrey's dancing about in skin-tight lycra and Chase seems keen to have sex with Batman without even removing his face mask. This bold design aesthetic extends to the city's architecture, which has been deliberately exaggerated out of all proportion. If Batman presented a Gotham you could believe people lived in, and Returns presented a Gotham you could believe people lived in 50 years into the past, then Forever presents a Gotham in which you simply can't believe anyone lives there at all. It is so divorced from reality that it's impossible to take seriously.

You can't take the villains seriously either. Tommy Lee Jones plays Two-Face in such an over-the-top and maniacal fashion that any interesting aspects of the character and drowned out by all the gurning. He's clearly aiming for something akin to Jack Nicholson's Joker, except that Nicholson was smart enough to contain little moments of calm inside his performance that actually made the Joker slightly terrifying. Jones' Two-Face is just empty sound and fury. It is, without rival, the worst performance of his entire career. He isn't helped by Akiva Goldsman's screenplay, that actively breaks every rule the character has. Two-Face, as written in the comic books, is ruthlessly arbitrary. There is a scene during Batman Forever where he sits flipping his coin again and again until it gives him the result he wants: this is the exact opposite of what the character's supposed to do, and renders his entire schtick nonsensical. (And of course this is yet another role that was recast - Billy Dee Williams played Dent in Batman and was contracted to return. Once again, he was paid out by Warner Bros when they went with Tommy Lee Jones.)

Jim Carrey plays the Riddler. At the time of his casting he was in the middle of pretty much the fastest ascension to super-stardom ever, after the one-two punch of 1994's Ace Ventura: Pet Detective and The Mask made him Hollywood's newest comedy star. He was cast as the Riddler immediately after Ace Ventura topped the box office, and by the time Batman Forever was in cinemas he had enjoyed a third comedy hit in Dumb & Dumber. By the end of 1995 he would become the highest-paid actor in film history for Ben Stiller's comedy The Cable Guy. Here he plays the same over-the-top, manic comedy routine that he played in his three earlier films: a different character, certainly, but the technique is identical. He dominates the film and is rather amusing in fits and starts, but it feels like a poor match for the material.

And here's the thing: the material is a poor match for the material. Batman Forever is a film that has attempted to shift suavely from one stool to another, stylistically speaking, and catastrophically fallen to the floor in-between. Some scenes and moments play straight out of Tim Burton's playbook. Others feel like a much more earnest, old-fashioned Hollywood blockbuster. Other scenes feel like a Jim Carrey comedy. Others feel like the 1960s Batman TV series. It's all jumbled in together, higgledy-piggledy, working against itself so violent that pretty much none of the movie actually works.

To make matters worse, Warner Bros executives felt Schumacher's original cut of the film was much too long, and went about editing more than 40 minutes of plot out of it. The remaining film wasn't just truncated - it was actively re-arranged, so that Kidman and Kilmer had to return to overdub certain lines to make them make sense. Once you know that you're missing a quarter of the movie, and that what you're seeing has been re-arranged into a completely nonsensical order, Batman Forever finally begins to make some kind of demented sense.

It's a terrible movie, but I suspect Warner Bros didn't mind. It grossed $336m worldwide, up more than 25% from Batman Returns, and sold a truckload of tie-in toys and merchandise. Schumacher and Goldsman was immediately re-hired to develop a fourth film, and everybody went home with an awful lot of money.

Let's step back a bit and really think about this. Joel Schumacher is a great director: his resume at this point included such films as The Lost Boys, Falling Down and The Client. All of the actors had demonstrated themselves capable of brilliant performances. If they had all brought their A-game, and presented something serious, this could have been a sensational film. It can't all be Akiva Goldsman's fault, can it?