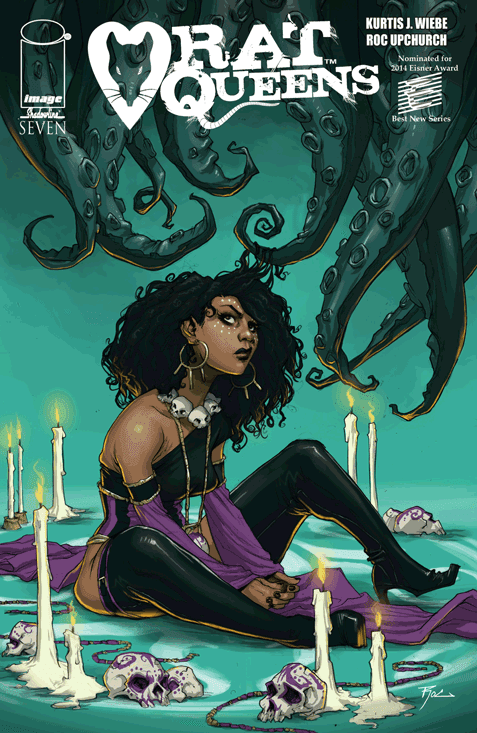 Rat Queens is a feral, foul-mouthed, inappropriate, hilariously funny Dungeons & Dragons riff featuring a cast of characters so distinctive and entertaining that the book actually transcends its pulp sources and really becomes its own thing. I was sucked in by the first trade paperback, and picked up the next monthly issue in June. Now I'm back reading issue #7 and it continues to be one of the best comics on the market.

This isn't a book that will please everyone. For one thing its lead cast tend to drink, swear and sleep around quite a lot. On the other their responses to their monster-fighting high fantasy life are so bluntly realistic that they make the whole book feel like a breath of fresh air. This issue develops the latest threat to the frontier city of Palisades - giant demonic tentacles are involved, as is a god called N'Rygoth - but also manages to give the characters some unexpected depth and nuance. Whereas they started back in issue #1 as cyphers for jokes, they're now becoming fully-developed and three-dimensional people. That's taking the book up a notch from hilarious pastiche to something altogether better.

Kurtis J. Weibe is just getting better and better as a writer. I adored his earlier miniseries Debris (with Riley Rossmo) but this is a leap even better. Roc Upchurch's artwork is fabulous and filled with personality and emotion. If you've ever wanted Princess Leia to punch Darth Vader in the face and tell him to stick his Death Star up his ass, or for Frodo to proclaim 'fuck this shit' and make a beeline for the nearest pub, this is your comic book. (5/5)

Under the cut: reviews of Batman Eternal, Batwoman, Eye of Newt, The Last Broadcast, Robin Rises: Omega, She-Hulk, Silver Surfer, Umbral and The Wicked + The Divine.

With the Carmine Falcone arc pretty much wound up, it's time to return to the Spectre and Batwing's exploration of Arkham Asylum - which is kind of weird because within the context of the story days if not weeks have passed since they went in. Meanwhile Red Robin teams up (somewhat unwillingly) with Harper Row in Japan, and Batgirl and Red Hood's South American adventure brings in Batwoman as well. Crikey. It's all well and good, but unfocused: this needs to pull together. (3/5)

Obviously something happened in regards to Jeremy Haun and deadlines, because a few pages into this issue the art duties swap over to Scott Kolins, DC's go-to-guy for last minute art duties and my personal least favourite artist working for the Big Two today. That kind of takes the wind out of whatever happens in the comic, which is to be honest not too interesting anyway. I was doubtful about this book post-Williams, and this issue isn't doing a very good job of convincing me it's still worthwhile. (1/5)

A shoe drops in this issue, as things suddenly become much clearer in regards to Newt's identity and what this story is actually about. I'm still adoring what Michael Hague is doing with this, presenting something more akin to an illustrated storybook that a traditional comic. The artwork is absolutely gorgeous, and the storytelling is delightfully old-fashioned. Would I like this comic if it was a regular monthly thing? Maybe not. As a four-issue miniseries, however, it's absolutely wonderful. (4/5)

This comic just gets better and better. It's a complicated read, jumping back and forth between time periods but slowly developing a picture of secret chambers, magicians, and occult societies. I particularly like Gabriel Lumazark's art style; it's reminiscent of early IDW comics before that publisher refocused on licensed properties. It's also very attractively packaged - it's certainly the nicest comic on the shelves at the moment in terms of presentation. (5/5)

This issue is, let's face it, a total shameless cash grab. It's the next issue of Batman and Robin, only it's a big larger (29 pages rather than the standard 20) with an extra eight-page prologue that runs down the entire Damian Wayne saga so far. It's also a little bit confusing, with sudden talk of a magical crystal, and Darkseid's armies, and a bunch of other things that I suspect are quite clear if you've been reading Justice League in the past three years (I haven't). Kubert and Glapion's artwork is great as always, but this issue is - prologue aside - basically one big fight sequence. Entertaining? To an extent. Value for money? Not really. Now that Batman's on his way to Apokalips to bring Damian back to life, this storyline could get really exciting - but it's not off to the best of starts. (2/5)

Last issue saw Jennifer Walters uncover a mysterious closed lawsuit, the "blue file", with the unusual effect that anyone asked about the suit appeared to break into a mysterious homicidal rage. This issue picks up from there, but seems to burn a lot of the promise of last issue with a fairly messy and unfocused second instalment. Things aren't helped by guest artist Ron Wimberly, whose style works fine during dialogue scenes but becomes incoherent during the issue's main fight sequence. Then things end in a rather truncated and odd fashion - I'm sure this isn't the end of the blue file saga, but it feels like a weird place to stop the issue. (2/5)

This is a bit of a weird issue. The first three all formed their own adventure, whereas this issue does a bit of a follow-up, resolves a few points, throws in an odd cameo for the Guardians of the Galaxy (was this mandated by editorial because of the film coming out?) and sets up the next storyline. It would be kind of annoying, in much the same way that She-Hulk was this week, if it wasn't for Allred's beautifully simple artwork and Slott's fabulous way with humour and dialogue. Quite frankly I'm not sure Norrin Rad's been this entertaining in a decade. (4/5)

Umbral is back! This dark fantasy comic is one of my favourite books for the year, and just to cement its status as America's premier fantasy comic book this issue comes with a map. Rascal and her companions have escaped the city, but are still under threat from the shadowy Umbral. Good dialogue and plotting, great artwork, engaging characters - I'm just going to go ahead and assume that if you're not reading Umbral then you presumably don't like nice things. (4/5)

The comic book that pretty much made me an adult fan of the medium was Grant Morrison's The Invisibles. It had a huge impact on me at a very impressionable age, and to be honest I've searched for other comics in the same style ever since. It was pretty much a unique book, however, so the best I've hoped for has been hints of what I found in Morrison's work. I got a lot from Jonathan Hickman's works over the years, and I get a lot from Kieron Gillen as well. The Wicked + the Divine is one of these works: ancient gods return to Earth, inhabiting human bodies for two years until they die. In the 21st century they're basically a controversial kind of pop star, and we're following one of their fans as she tries to prove why one of them - Lucifer - is not a murderer. The Invisibles worked so well because it threw disparate concepts at one another (the Marquis de Sade and time travel, Aztec mythology and 1960s British spy TV). The Wicked + the Divine is working pretty much in the same way: this is a perfect collision of old world mythology and modern pop culture, with crisp, faultless artwork by Jamie McKelvie. (5/5)

Winner of the Week: The Wicked + the Divine is a must-read.
Loser of the Week: Batwoman - this comic's fall from grace is painful to watch.
Posted by Grant at 9:11 PM