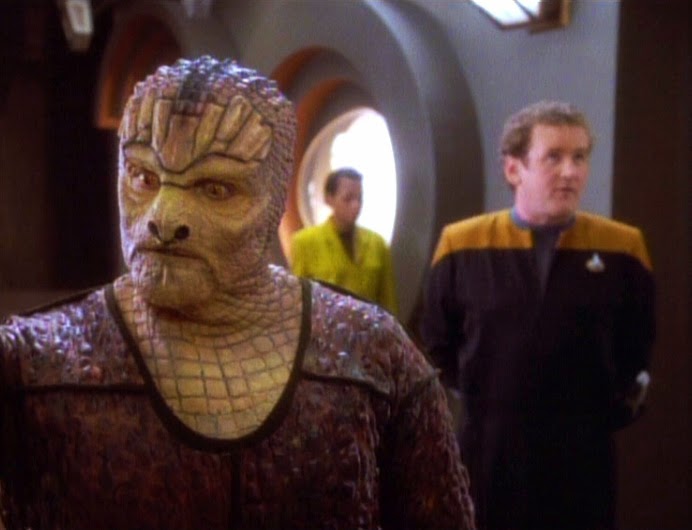 Deep Space Nine has a first encounter with a humanoid reptile from the Gamma Quadrant. He calls himself "Tosk", although it's unclear whether that's his name or his species. He's desperate for O'Brien to repair his starship so he can be on his way. Even after he's caught trying to break into the station's armoury he still refuses to explain who he is or what he's running away from.

"Captive Pursuit" is a step down in quality from Deep Space Nine's first few episodes, but it is still an entertaining hour of television. Unlike previous episodes it doesn't really establish a new character relationship, and it doesn't further explore the Bajoran recovery. Instead it showcases Chief O'Brien, and delivers a by-the-numbers Star Trek story of moral quandary and phaser-shooting action. That's not always a bad thing. I like some good phaser-shooting action from time to time.

Scott MacDonald is great as Tosk, playing the character with a combination of wide-eyed naivety and instinctive aggression. He's nicely written as well, since he's a sentient creature bred purely to be hunted down and killed by the species that created him. As a result he doesn't have any real social abilities or complexity, and both the teleplay and MacDonald's performance express that rather well.

The moral issue at the episode's centre isn't particularly original: Tosk has been bred to be hunted, so do the DS9 crew protect him and break their own laws about interfering with other cultures, or do they hand him back to be escorted to his homeworld in disgrace? It's not quite as irritating a Prime Directive conundrum as I've seen over in The Next Generation (for example, Sisko openly admits that should Tosk claim asylum the entire problem is moot), but it does feel a little under-done and over-heated.

It's nice to see Colm Meaney get an episode of his own, although it's a bit of a shame that unlike earlier episodes his doesn't really do anything to flesh out or expand his character. It's almost as if the production team have taken Miles O'Brien for granted; he's been onscreen for five seasons already at this point, and it's apparent that he's really a bit of a job description attached to an actor. Meaney does a good job of compensation, but he does seem more than a little underwritten. It's a little sad that the episode falls into the cliche of having a Starfleet officer go rogue to break the law, and simply get his or her knuckles rapped at the end.

So it's an entertaining episode, but a definitely step down from earlier ones. It does preserve the 100% quality ratio that Season 1 has been enjoying, but to be honest it doesn't preserve it by much.
Posted by Grant at 10:49 PM