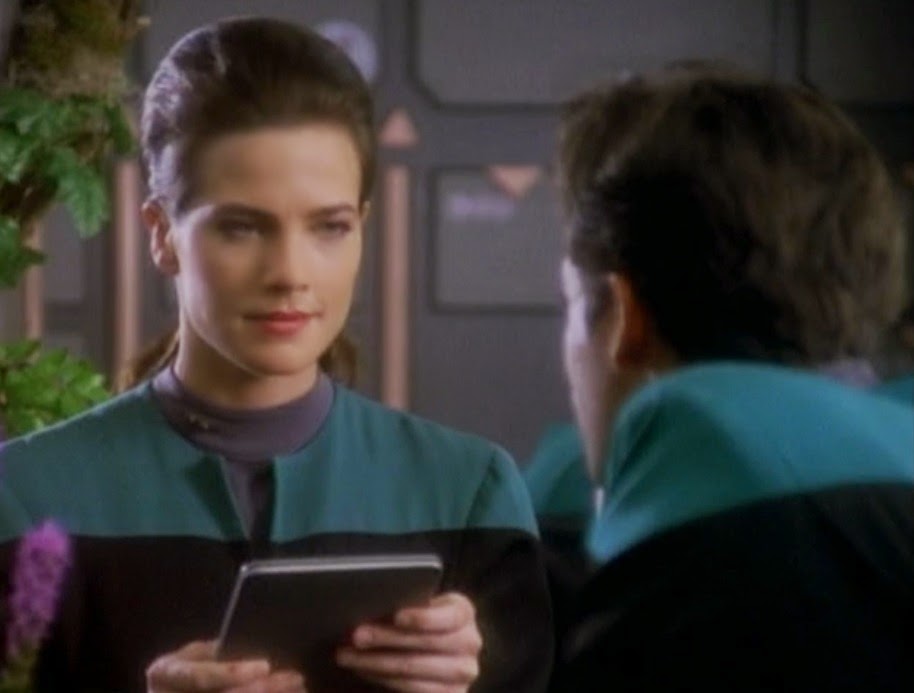 A group of alien visitors attempt to violently seize Lieutenant Commander Dax and abduct her from the station. Once captured, they announce they are enacting a sanctioned extradition to take Dax back to their planet on a charge of murder. There's only one problem: the accused is former host Curzon Dax, and it is up to a Bajoran magistrate to decide whether one host can be tried for the crimes of another.

"Dax" (imaginative title there, guys) is one of those episodes where you can see the reasoning behind it, and you can see why the creatives thought it would make for an engaging hour of television, yet it's painfully obvious why it was never going to work. Jadzia Dax is a fascinating character with enormous scope for science fiction drama, and I imagine the writers were keen to start exploring her potential as soon as possible. At the same time a courtroom drama is an inexpensive format that could save money likely spent on the pilot, and can generate great character-based drama through dialogue and passioned debate. After all, this entire approach worked wonders for Commander Data in The Next Generation's "The Measure of a Man"; why not here as well?

The core problem is, I think, in the plotting. "The Measure of a Man" asked us a profound philosophical question: is a highly advanced simulation of a sentient being by extension a sentient being in its own right? "Dax", on the other hand, short-circuits its own question. We don't get the chance to properly consider whether one host should be legally liable for the crimes of their predecessor because it's blatantly clear from the outset that Curzon Dax didn't commit the crime in the first place. Much better would be to take a far bolder stance: show that Curzon did commit a crime, and then allow the legal debate to proceed. That's a much, much more interesting basis for an hour of television: if you can remember committing a crime, if you still can sense the guilt of stabbing a person, or shooting them, or blowing them out of an airlock, are you then culpable for it?

As it stands, it's an underwhelming script with very generic guest characters, and you get the impression watching it that the actors know it. Nobody brings their A-game to this, because there isn't an opportunity for them to do so. The script keeps low-balling at the actors: they can punt the episode along a bit, but no one gets a chance to hit a home run.

It is nice seeing Gregory Itzin show up. He was so fabulous in 24 as a back-stabbing, cowardly United States President that I can't help but enjoy seeing him in anything else he does. Of course this was quite a few years before 24, but back here he's still a very talented guy - although as mentioned the script doesn't do him many favours.

Two poor episodes in a row have really put a dent in Season 1's quality ratio. We're down to 71% now. Hopefully future episodes will pick things up.
Posted by Grant at 7:10 AM