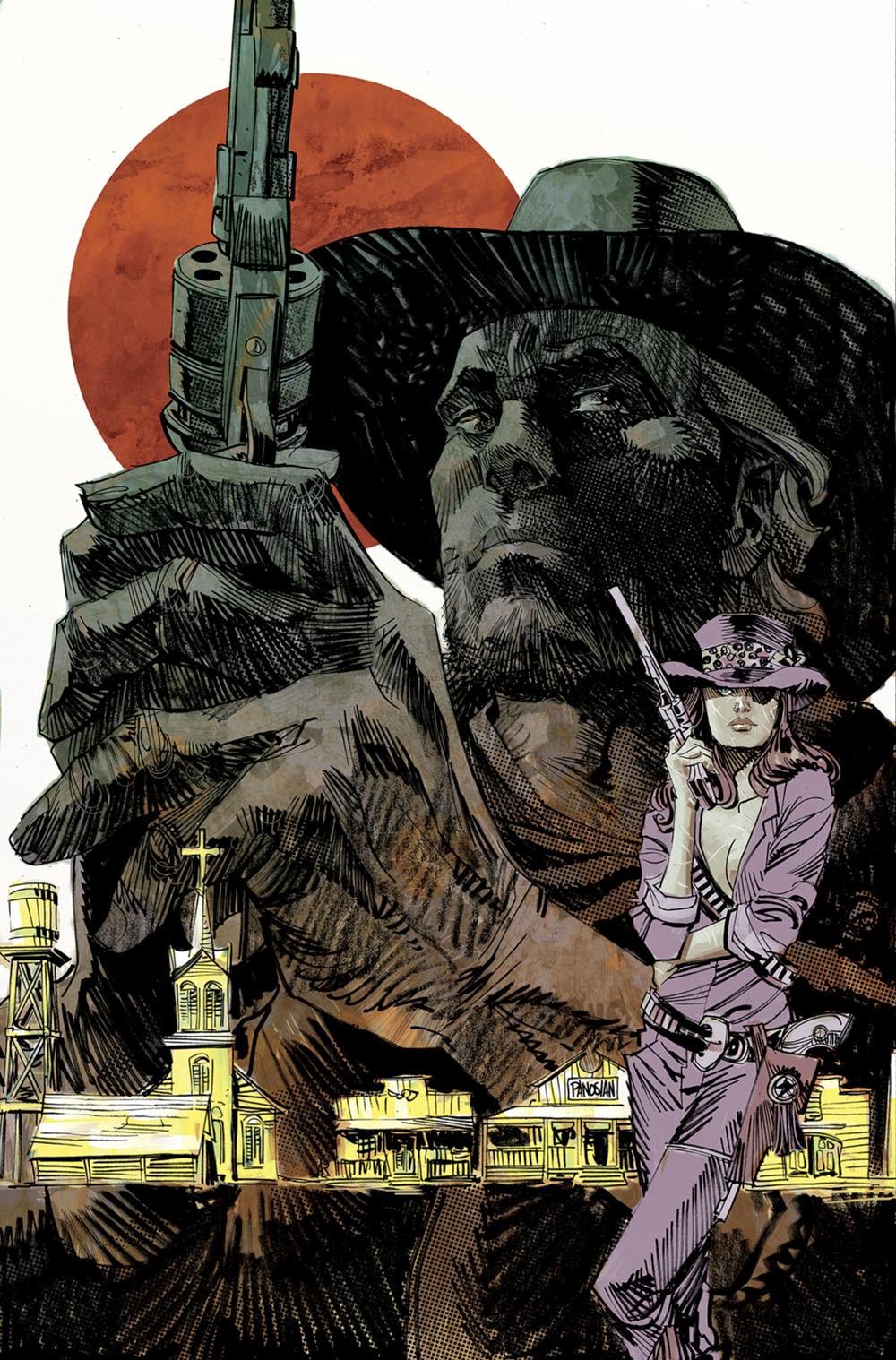 Last week's All-Star Western provided me with exactly the sort of pulp western pastiche that drew me to Gray and Palmiotti's Jonah Hex comics in the first place. This is a shame, because the book is returning to its strengths at precisely the time DC have chosen to cancel it. Sales have never been strong for either this or the pre-New 52 Jonah Hex, but it's generally been a decent and highly entertaining book in a genre that really doesn't get a play in modern comics. I really hope that Hex gets another shot at a comic some time soon, because this current volume managed to run a solid two years before sales dropped below 15,000 copies and there's no indication that the same wouldn't be true of a well-publicised relaunch in a year or so.

Gray and Palmiotti are moving on to their new title, a relaunch of DC's old war comic Star-Spangled War Stories. This will be DC's third post-2011 comic based around war stories, after both Men of War and G.I. Combat crashed and burned. I do think there's potential for a decent, long-running war comic at DC, but clearly they've yet to identify what it is. I'm not sure the adventures of a zombie soldier fighting through history (Star-Spangled's premise) is going to be it.

I love the idea of DC stretching its books beyond their superhero lines, but the sad fact is that their brand is so specific now that any books outside of those narrow lines is going to struggle. I'd love to see DC's pirate comic, or a solid medieval action book, or a science fiction book. Sadly I don't think the company is aligned for these sorts of books to take.

There are two more issues of All-Star Western to come. Enjoy them while they last. (4/5)

Under the cut: a big week, with reviews of Aquaman, Batman, Batman Eternal, The Flash, The Fuse, He-Man and the Masters of the Universe, The Massive, Ms Marvel, Revival, Saga, Star Wars Legacy and Star Wars: Rebel Heist.

This issue finally introduces a new Aquaman villain, the genetically engineered and decidedly scary-looking Chimera. It's an arresting design, and with good writing I can see him becoming a new regular enemy for Arthur. I really do like Jeff Parker's writing style when it comes to superhero comics: he drip-feeds the reader, with each issue pushing multiple storylines along and building to a very satisfying long-term arc rather than each issue being a self-contained little scene or adventure of its own. This issue also continues Mera's adventures down in Atlantis, which are marginally less interesting than Chimera, but still entertaining. This is a solid and enjoyable superhero comic. (3/5)

"Zero Year" rushes headlong towards its long-awaited conclusion as Batman finally takes his fight directly to the Riddler. I think it was a stroke of genius to base this revised origin story around the Riddler: he's always been a character with a lot of potential, but has never quite managed to be established as a top-range villain like the Joker, the Penguin or Catwoman. Making him Batman's first-ever antagonist goes a long way to refashioning him as someone a lot more critical to the franchise. (4/5)

This series is progressing along very nicely, although despite some very good work in the past two issues streamlining and tidying up plot threads it does still feel a little unfocused. I really liked the interplay between the imprisoned ex-commissioner Jim Gordon and Batman: it's a scene that not only reinforces their friendship but also highlights Gordon's integrity and character at the same time. It also ends in a cliffhanger that's been about a year coming; hopefully issue #13 does a good job of playing the unexpected encounter out. (4/5)

Robert Venditti and Van Jensen have jumped onto the Flash with an epic time-travelling storyline that - intentionally or by accident - seems to duplicate what DC are doing with their Futures End weekly series. Anyway I'm assuming it's an epic, because this is taking its sweet time getting going. We're three issues in and I swear you could have told the story to date in two issues maximum, maybe even one if you put more panels on each page. There's an irony in pacing The Flash of all heroes this slowly. I really hope things pick up soon. (2/5)

This book continues to be a faultless science fiction police procedural. I actually thought this issue was going to be the final part of the first arc, so the last page cliffhanger took me quite by surprise. Now I can't wait for issue #6. The first trade will be available in August, and I strongly recommend you buy it. This is a smart, slickly presented comic book that's walking a tightrope between originality and the clever re-use of genre tropes and archetypes. Like all good stories, however, the thing that gets me coming back each month is the characters. This is top notch stuff, and every month I find myself awarding it five stars. (5/5)

He-Man and the Masters of the Universe #14

Every now and then I get a moment of clarity and wonder why on Earth I'm buying a monthly comic book adapted from a 1980s toy franchise. Nostalgia is the main reason, clearly, since I used to buy quite heavily into that franchise as a child. Dan Abnett has turned it into an entertaining fantasy story as well, and while nostalgia got me in its his writing that's keeping me going. He's slowly transforming the comic from a simple adaptation to something quite distinctive. As a long-term fan of the characters it's been a delight seeing him rearrange and re-envisage one character after another, and certainly he hasn't been afraid to shake the continuity tree quite vigorously while developing the story. Pop Mahn's art is good: I've always liked his stuff, and he's keeping things slick and enjoyable here. (3/5)

The "Sahara" arc comes to a close with this issue: it's been one of the strongest arcs so far for this post-apocalyptic epic. It's also thrown a whole new wrinkle into the series. Just who the hell is Mary? How old is she? What once seemed like a very grounded and realistic post-crash thriller is now becoming much more surreal and almost verges on fantasy. It's a change that works: I cannot wait to see what direction Brian Wood takes this book in now. (4/5)

We've hit the point of the origin story where the character is established, her powers seem reasonably clear (albeit hilariously goofy) and she's made her debut in her proper costume. I'm loving it: this is such a breezy, warm-hearted and funny book, and Kamala is such a likeable lead. Adrian Alphona's artwork matches the writing as well: it's bright, charming and very easy to read. This book should be a must-read for anyone after a fun superhero comic, and while I don't want to guarantee this it strikes me as a pretty suitable all-ages read. (5/5)

It's been almost two years' worth of comics, but Revival finally stretches out beyond the borders of Wisconsin, following police officer Dana Cyprus to New York City as she cooperates on an FBI investigation into illegal 'returned' meat. It's a horrifying concept, and the issue doesn't get any lighter as Ibrahim encounters a returned who returned to life in the middle of being cremated - it's not pretty. Mike Norton's artwork is as excellent as ever, showing the very 1990s Vertigo-esque style that attracted me to this book in the first place. I'm also loving Em's subplot as she embraces her undead status with the help of a similarly undead extreme sports enthusiast: you probably have to read it. And you should be reading it. (5/5)

I'm still feeling a bit off-kilter with Saga now that it's returned for a fourth story arc. I've always found Alana a relatively spiky character, but in these past two issues she seems to be behaving in an actively unlikeable fashion. I'm not sure I like it, or the direction in which the book is headed. There's also a very slight sense that Vaughn and Staples are making some creative decisions - primarily the graphic opening pages of the last two issues - purely for shock and humour value rather than for story. It's still a comic worth reading, but for me it's not the A-grade book that it was - hopefully in future issues it will improve. (3/5)

Ania Solo attempts to intercede when Imperial Knight Jao Assam is sentenced to death. This is the third-last issue of Star Wars Legacy, so I'm not entirely sure where this book can go in the next two issues. This feels like the set-up for a longer arc, and I really hope things aren't left hanging at the very end. It's been an entertaining comic with a lot of promise, although I'm not sure Hardman and Bechko have ever quite managed to exploit that promise. (3/5)

This is a comic book about Chewbacca kicking ass. In a sane world that should be enough to convince you to try it out. If there's one thing that nearly everyone can agree is cool about Star Wars, it's Chewbacca, the tall, hairy and violent Wookiee and co-pilot to the Millennium Falcon. This is the third issue in a row to follow the same pattern: introduce hero, show them being outstanding at their job, climax with them being captured by the Empire. I have no idea what the heist here is, but it's clearly going to wrap up at breakneck pace in next month's issue #4. I can't wait. (4/5)