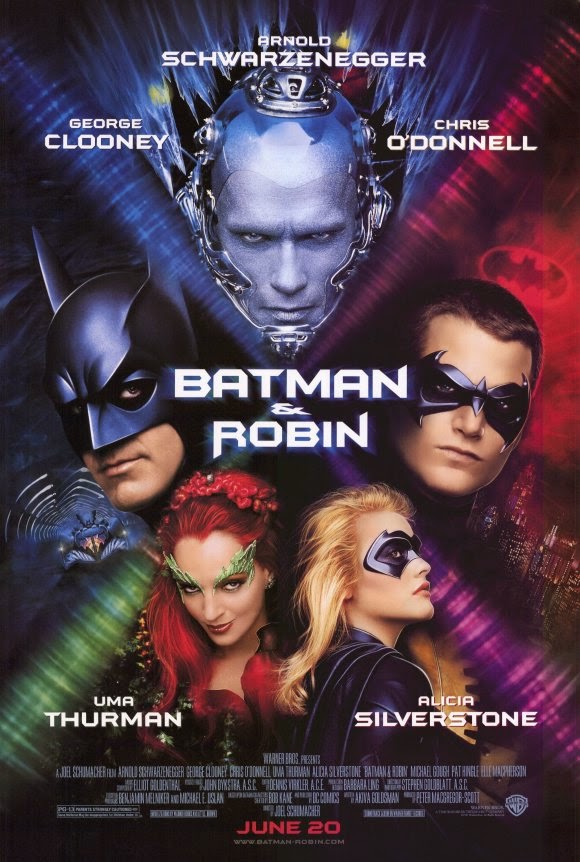 In 1995 Warner Bros released Batman Forever to widespread popular acclaim. The film relaunched the studio's Batman franchise in a new direction under director Joel Schumacher, and most importantly for the studio it was a licensing juggernaut. Toy manufacturers and sponsors who had felt badly burned by Tim Burton's less commercially oriented Batman Returns had flocked back to the property in droves. Indeed the studio was so keen to see another Batman film from Schumacher that they greenlit in on an accelerated schedule. Rather than be released in 1998 as original planned, Batman & Robin would be released a year earlier in the summer of 1997.

Ever since it was released in cinemas Batman & Robin has been widely acknowledged as the nadir of the Batman franchise, and a crippling creative misfire that stopped the Batman movies in their tracks for eight years. That assessment is only partially accurate: certainly the film is not a good one by any reasonable definition, and certainly it's failure at the box office and fiercely negative word of mouth saw Warner Bros immediately cancel 1999's Batman Triumphant before flailing around for half a decade in the attempt to work out how to fix the cock-up. It's not, however, the worst of the Batman films. That might be the perceived wisdom, but it's not to my mind actually true. This film has three key advantages over its immediate predecessor Batman Forever. Firstly, it's narratively coherent. Secondly, it actually has a consistency of tone. Thirdly, and critically, it's the most accurate adaptation of the Batman comics ever committed to film.

Let's take those three points one at a time. Firstly: the plot. It does actually make a loopy kind of sense, which is more than you can say for Batman or Batman Forever. It's simplistic, sure, and ridiculously silly, but in the sense of basic three-act storytelling it does actually do its job.

Secondly there's the tone. Batman Forever creatively misfires because it's trapped somewhere between gothic Tim Burton aesthetics, an earnest straight-forward superhero story, and a goofy Adam West-style spoof. Batman & Robin drops two of those styles in favour of pure unabashed silliness. You may not appreciate the tone, and you may not think it's the most suitable tone for a $125 million dollar Batman film, but at least the film is stylistically consistent.

Finally there's how the film works as an adaptation, and for better or worse this actually adapts a specific type of Batman comic extraordinarily well. The opening scenes see Batman and Robin play ice hockey in a natural history museum using a fist-sized diamond as a puck, Batman sliding down the spine of a dinosaur skeleton and the Dynamic Duo riding surfboards down the rooftops of Gotham before Robin gets frozen solid in a block of ice. It's insanely stupid, but much as post-Frank Miller enthusiasts might wail and moan that it's the worst Batman ever, it does fit pretty well with what the comics were doing in the 1950s and 1960s. So, in effect, Batman & Robin's crime is not failing to adapt Batman well, it's that they've successfully adapted a period of Batman few fans wanted to ever see again. If you're someone who pines for the glory days of "The Rainbow Batman" or the "Bat-Baby" saga, however, then the good news is that Joel Schumacher made Batman & Robin exclusively for you.

It's also worth noting that for a hero that, bar a few early issues in the 1930s, doesn't ever kill, Batman's been killing quite a lot of people in the Warner Bros movies. The Joker, the Penguin and Two-Face all fell to their deaths thanks to Batman's interference, and it's striking that in this - the widely regarded worst film of the lot - Batman doesn't actually kill anybody.

George Clooney replaces Val Kilmer as the third Batman in four movies, which isn't a promising track record. Here he plays his well-honed character of George Clooney, something he did a lot in his ER days (he was still shooting ER three days a week while filming Batman & Robin). He'll give a wry smile, and look down. He looks down quite a lot during scenes of dialogue, with a weird tic that might be avoiding eye contact with his co-stars and might be glancing at cue cards all over the set. Quite frankly he looks embarrassed, and possibly even mortified that he's stumbled into the film.

Chris O'Donnell, on the other hand, is playing the film with all the gravitas he can muster, as if by sheer force of will he can bend the self-aware pop-art spoof into a serious drama film. He can't.

Alicia Silverstone, then the hottest young actress in Hollywood, plays Barbara Wilson, who ultimately puts on a rubber suit of her own as Batgirl for the film's climax. I can see why they changed the character away from her being Jim Gordon's daughter, since in these films Gordon has been nothing but a cypher. Silverstone's performance is the weakest of the film's leads. It's not that she doesn't get much to do, it's that she's so weirdly chipper and happy while doing it.

Arnold Schwarzenegger and Uma Thurman absolutely nail what is going on with this movie, and adjust their performances accordingly. They over-act to their hearts contents. Schwarzenegger is clearly relishing the opportunity to play the villain - it's only the second time he's ever done it - and benefits from a screenplay tailored to his kind of pun-filled dialogue. At the time it felt like a cruel betrayal: the animated TV series that was broadcast in parallel with the movies featured a wonderfully tragic and nuanced version of the character, and this broad-strokes B-movie supervillain angered a lot of fans. In the context of the film, like it or not, it's perfectly pitched. Uma Thurman plays Poison Ivy like a bad impression of a 1940s femme fatale, except that like Schwarzenegger it's an intentional kind of bad.

The film also features Bane, who is pretty much thrown away as a moronic thug. This seemed to particularly upset the hardcore, none of whom seemed to notice that the film throws away Swamp Thing villain the Floronic Man (played by John Glover) within the first 20 minutes as well.

Visually the film takes everything Schumacher added to Batman Forever and takes it up a notch. Where the designs of Forever felt a little perverse, here they are positively fetishised (check out those rubber crotch and butt shots). Where Gotham's architecture was exaggerated beyond belief, here it's exaggerated beyond comprehension. The use of colour is overwhelming. Importantly, however, it's all unified. This feels like the work of a singular directorial vision. It may have been extensively dictated by Warner Bros, and the plot and design may have been engineering with feedback from toy manufacturers, but it's a consistent vision - albeit a vision the audience wasn't interested in seeing.

During production Warner Bros was so convinced of Batman & Robin's merits that they rehired Joel Schumacher for a fifth Batman movie and they hired Mark Protosevich to write it. Within weeks of Batman & Robin's release, those plans were in the trash can.

Movies can be bad for a whole pile of reasons. Batman Forever was bad because it had an inconsistency of tone and was edited to the point of nonsense. Batman & Robin is a bad film because it's based on a bad idea. It's flawlessly executed, but if the foundation doesn't work then a flawless execution is never going to save you.

I'm not going to lie to you though: I rewatched this film last week and laughed a hell of a lot, and had a great time watching it. Judge it entirely on its own merits and it almost gets away with it.
Posted by Grant at 12:43 PM