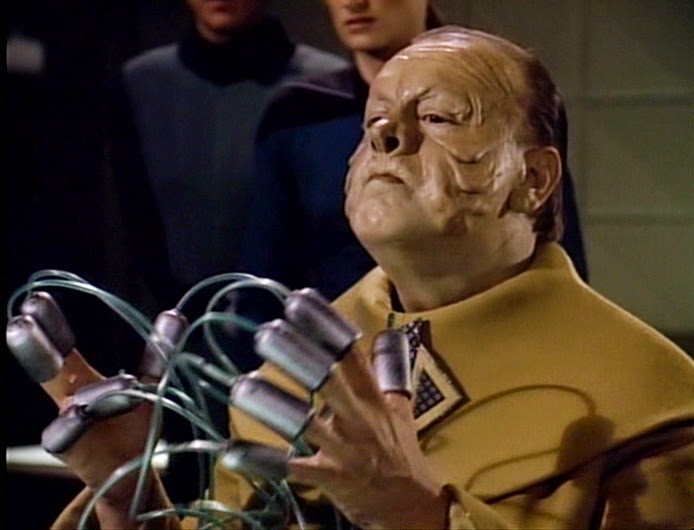 Due to the looming threat of a Borg invasion, the Enterprise is put through its paces in a ship-to-ship wargame - an exercise that's interrupted by the arrival of a hostile Ferengi starship. Meanwhile Data suffers a crisis of confidence when he loses a strategic board game to one of it's all-time masters.

While this has been a shaky and often dreadful season of television, one of the best advances The Next Generation has made with this second year is its loosening-up of characters. Commander Riker is a case in point: in the first season he's deadly serious at all times, whereas in the second he's relaxed, warm, genuinely funny and constantly does that weird thing where he swings his leg over the back of a chair before sitting in it. Part of the reasoning for my doing these TV series rewatches is to re-assess shows with a fresh perspective, and one of the biggest re-assessments I've made with this series is my opinion of Jonathan Frakes. It's not that I ever disliked his performance or his character; I just never before appreciated just how funny Frakes can be.

Here he's assembling a team of Enterprise officers to refit a Constellation-class wreck and send it into combat with the Enterprise. He picks his team - including La Forge, Worf and Wesley - not because it's their collective duty, but because it seems fun. He makes me want to watch further, and makes me buy into the episode in a way that's been quite difficult throughout this season. This is another episode that demonstrates what I argued some episodes back: the individual stories of Season 2 aren't any good, but the regular cast have gelled and relaxed like nobody's business. This episode isn't perfect, but it's a lot of fun.

Of course the episode's climax suffers badly from a lapse of logic: what lunatic would set up a wargame in deep uncharted territory, deactivate the weapons of both starships and then simply hope that an enemy power (of which there are many) doesn't wander in and start taking pot shots? Thankfully it's the Ferengi, who I suppose aren't the galaxy's greatest challenge, but it still beggars belief that the Enterprise couldn't simply flick a switch or tell the computer and instantly get its weapons back. In the end, however, everybody seems to have fun and nobody is serious injured.

Less engaging is Data's crisis of confidence after losing at the virtual game strategema to the official ranked 'third master' Sirna Kolrami. The game seems to involve plugging tubes onto your fingers and then waggling them about frantically, which is pretty much par for the course for silly science fiction TV board games. It's a fairly dull subplot because it's so predictable, and there's no small amount of relief to be had when Picard eventually tires of Data's self-doubt and snaps at him to stop fussing and get on with his life.

Roy Brocksmith is actively annoying as Kolrami. It's one of those weird performances where the actor seems to be going out of his way to irritate the viewer. Thankfully the character never returns, although Brocksmith does appear in Deep Space Nine in a different role. It's worth noting the Ferengi commander: he's played by Armin Shimerman, who played the first Ferengi in "The Last Outpost" and of course will go on to play Quark in seven seasons of Deep Space Nine.

So this is a faulty and uneven episode, but Riker and his buddies make it work overall. That makes this the ninth good episode of Season 2, which would be great where it not for the fact that this is the 21st episode overall: that's a quality ratio of 43%.
Posted by Grant at 9:14 AM