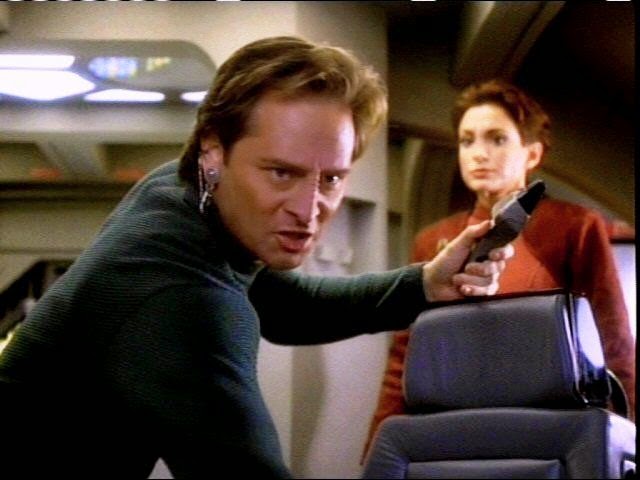 Major Kira finds her new position in the Bajoran government sorely tested when she crosses paths with Tahna Los, a former member of the Kohn-Ma terrorist cell that has continued to attack Cardassian outposts well after their withdrawal from Bajor. Meanwhile Dr Bashir meets Garak, a Cardassian tailor living on the station who may or may not be a spy.

I like that, only three episodes into the series, Deep Space Nine is bold enough to dive straight in and start exploring issues of post-conflict politics, terrorism, trust and compromise. This is exactly the kind of story that DS9 was built for, and which The Next Generation struggles to achieve. The Next Generation covered the Bajoran recovery once, in Season 5's "Ensign Ro". DS9 is embedded in Bajoran politics, and will be for the next seven years.

It's Major Kira's episode, and it deliberately pushes her into a position where she's opposing a man whom she would have called an ally only a year or two before. Tahna Los may have been a hero for the Bajoran resistance, but now he's continued where the rest of his people stopped. Forcing Kira to then trap and arrest him is really interesting dramatic territory, and I really liked the silent conclusion the episode reached. The episode also takes the time to establish Kira's friendship with Odo which, like the Bajoran politics, will continue developing throughout the show's run.

You can see that there were pretty serious concerns that existing viewers of The Next Generation might not follow to a new series: we already saw Picard, the Borg and the Enterprise in "Emissary". This episode showcases a brief appearance by the Klingon sisters Lursa and B'Etor, following their pivotal appearances in the Next Generation two-parter "Redemption". To be honest they're barely in the episode here, and feel more than a little out of place. This isn't the last appearance by a Next Generation character in Season 1. The writers and producers should have trusted in the new material they were developing, because the characters seem a poor fit.

Dr Bashir meets 'plain and simple' Garak for the first time. Once again, we revisit this character relationship many times in future episodes. Here the encounter is general funny: Garak is so ingratiating that he comes across as rather threatening. Bashir oscillates between blank-faced terror and childlike glee that he might be getting involved in some kind of dangerous espionage (he isn't). Garak amuses me, simply because he's so completely obvious about being some kind of spy simply by constantly denying the fact. He's brilliantly played by Andrew Robinson, and it's a shame this is his only first season appearance; we don't see him again until the Season 2 episode "Cardassians".

This is a really solid and enjoyable episode. While Lursa and B'Etor comes across as the stunt cameo they are, the rest is simply good television drama. It's already painting a more complex picture than the more idealistic Next Generation ever managed. Three episodes in, and we're three for three: I like that kind of quality ratio.

(As a random point of trivia, this episode was originally broadcast second in Deep Space Nine's first season, making it the first episode of Star Trek ever broadcast that didn't show or reference the USS Enterprise.)
Posted by Grant at 8:57 AM