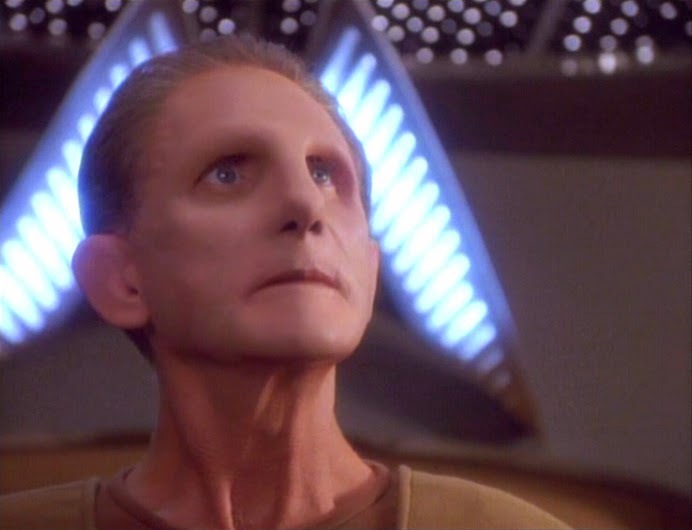 When a former Bajoran criminal arrives on Deep Space Nine, Odo wants him off straight away - even going as far as threatening physical violence. When the same Bajoran turns up dead in a holosuite, Odo suddenly shifts from chief investigator to prime suspect - and a lynch mob is building up outside of his office.

"A Man Alone" is an excellent episode. It's not great because it's central murder mystery is great; in fact, the mystery is the episode's weakest element. It's a great hour of television because it simply uses the plot as a framework, and spends most of its time further exploring the series' cast of characters. In particular it cements the relationship between Odo and Quark, which is one of my favourite parts of the whole series. They're essentially on opposite sides of the law, but there's a respect there and an almost perverse level of affection. It helps that both Armin Shimerman (Quark) and Rene Auberjonois (Odo) are such strong actors, because they play a lot of emotions in between the lines they're given.

Similarly the episode follows up on the relationship between Commander Sisko and Lieutenant Dax. He's known Dax for half of his life, but as an old man. As a young woman she's a different matter. It's quite a complex relationship to play out. The Dax symbiont is still the same, but the woman Jadzia - despite retaining Curzon's memories - is a completely different person. It's great to see the series take the time out to actually explore this transition for Sisko, and both characters are allowed to acknowledge that it's as awkward as hell.

Dr Bashir continues his attempts to woo Dax, which isn't really wooing so much as sexual harassment in the workplace. I think it's supposed to be charming, and Terry Farrell plays her side of the conversations as if it's harmless fun, but it's still a grossly inappropriate thing for Bashir to be doing. He really isn't a very likeable character in these early episodes.

We also witness the meeting of Jake Sisko and Nog, son of Rom. It's well played, particularly Sisko's quiet realisation towards the episode's end that all of the thing he's been saying to Jake ('Stay away from that Ferengi boy, he's bad news' and so on) Rom has been saying to Nog. There's a lot of this in Deep Space Nine. While The Next Generation generally featured morally sound, relatively conflict-free characters travelling from planet to planet, DS9 forces its characters to face their prejudices and interpersonal conflicts in lots of different ways.

It's also really clear from the second episode just how much more serialised Deep Space Nine is going to be. Here, not only are the characters further developed but Keiko O'Brien sets up the station's new school as well: it's a recurring feature for the rest of the series.

Two good episodes in a row bodes well from this season.
Posted by Grant at 1:45 PM