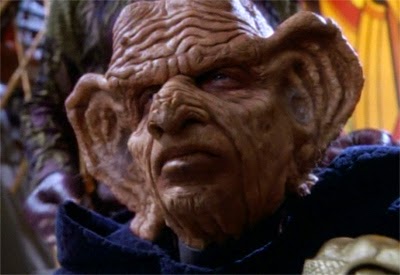 One of the great things that Star Trek: The Next Generation did with the franchise canon was to take pre-existing Trek cultures like the Klingons and the Romulans and actually develop their backstories, religions, societies and the like. They took characters that had previously been simple plot cyphers and gave them depth and nuance. In the same vein, Deep Space Nine took a species from The Next Generation - the Ferengi - and not only installed one as a series regular, they gave them a similarly detailed treatment. That process begins with "The Nagus".

When the Ferengi leader, Grand Nagus Zek (Wallace Shawn), arrives on Deep Space Nine, Quark fears it's to buy his bar. Instead it's to establish Ferengi business interests in the Gamma Quadrant. When Zek unexpectedly dies, however, Quark finds himself unexpectedly advanced to the leader's role - and under target for assassination.

There's actually quite a few things to talk about with this episode, but let's start on genre. This is a deliberate out-and-out comedy episode. Now Star Trek has been filled with comedic characters and moments, but it's comparatively rare for the series to actually devote an entire hour to being funny. This episode does, and remarkably I think it pulls it off. It has great moments of character, humorous performances - casting Wallace Shawn (The Princess Bride) as Zek was a masterstroke - and well-played parody. Quark's Godfather scene is brilliant. It's clear the production team realised the episode worked, because for better or worse we get at least one Ferengi comedy a year for the rest of the series.

The episode also gives centre stage to Quark, who until now has been a supporting character or part of an ensemble. This is the first real attempt by the production team to actually showcase the character on his own, and he's fabulous. Armin Shimerman is a highly skilled actor, and thanks to a couple of dry runs playing Ferengi in The Next Generation he's already worked out how to give his performance clearly through several pounds of paint and latex.

Max Grodenchik also makes his first proper appearance as Quark's hapless brother Rom. While he had already appeared in the series, this is the first time he gets any real screen time as well a change in voice and personality. This revised version of Rom sticks throughout the remainder of the series and develops more and more into an engaging character in his own right.

How much you enjoy the episode is going to come down to what you think of the Ferengi. They're a troublesome creation: invented as brutal savages for their disastrous first Next Generation appearance, and then revised into ruthless mercantile swindlers in one of the most obvious examples of unintentional anti-semitism I've ever seen. From this episode they start developing more distinctive cultural traits that gradually pull them away from such comparisons, but it's arguable that by 1993 the damage had already been done.

They're perhaps also a difficult people to properly love. They're deceitful, untrustworthy, horrendously misogynistic and generally cruel. At the same time they're also the victims of quite direct and confrontational racism at the hands of the human characters - this is an issue right through 1980s-2000s Star Trek. It seems that in Roddenberry's 24th century, racism is a thing of the past - unless you're one of those shifty, good-for-nothing Ferengi. Again, Deep Space Nine goes a long way to challenge that status quo.

There's a subplot with Jake teaching Rom's son Nog to read that's rather twee and on the nose, but it does bring with it yet more believable, warm interactions between Jake and his father, and it's a lovely resolution to an early Season 1 plot thread that Benjamin finally accepts his son's friendship with Nog and allows it to develop further.

I really liked this episode, but then I like what Deep Space Nine does for the Ferengi. If you're not a fan, you probably won't enjoy this episode either. Still, we're finally back with a good episode, and that makes six out of 10 so far: a quality ratio of 60%.
Posted by Grant at 7:26 AM