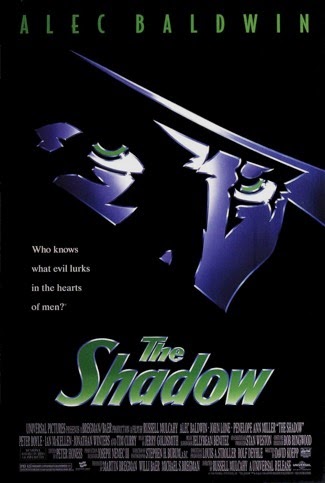 Last week I posted about The Lion King, and remarked on the film's 20th anniversary. This week heralds the 20th anniversary of another film from 1994, albeit a much less successful one. Russell Mulcahy's The Shadow opened one week after The Lion King and simply failed to compete for an audience. By the time it limped out of cinemas it had grossed only $32m in the USA, and $48m worldwide, earning less money than The Little Rascals, Timecop, Junior, Beverly Hills Cop III and Street Fighter: The Movie. The Shadow is, for the record, a better movie than all of those films.

The film is adapted from the famous crime-fighting hero created by Walter Gibson, who starred in radio serials and pulp novels in the 1930s. It's a film visibly made in the shadow of Tim Burton's Batman films (which were released in 1989 and 1992), and shares Burton's strong visual aesthetic and period-inspired setting. Of course in the case of The Shadow it's an actual period movie, and it brings in a far more overt supernatural element due to the Shadow, aka rich playboy Lamont Cranston, possessing psychic powers.

Russell Mulcahy had experienced a fairly haphazard career before taking on The Shadow. He almost certainly remains most famous for directing the fantasy film Highlander, but I'd argue pretty strenuously that The Shadow is the superior film. It has a much larger budget for one thing, and this has allowed Mulcahy - a terrific visual stylist - the freedom to recreate a wonderful, slightly exaggerated late 1930s New York within which to set his movie.

The film's failure pretty much ended Alec Baldwin's career as a Hollywood leading man, although it was a career that he never seemed particularly comfortable to have. After supporting or ensemble roles in Beetlejuice, Working Girl and Great Balls of Fire he graduated to lead status in John McTiernan's smash hit The Hunt for Red October. He then promptly refused to return for the sequel, Patriot Games, and instead performed in a string of well-regarded supporting roles in Alice, Prelude to a Kiss and Glengarry Glen Ross, where his one scene pretty much stole the whole movie. In the context of his film career The Shadow seems an odd choice, since it is essentially the only role of its type he ever played - before or since.

Baldwin is surrounded by a great supporting cast, including Tim Curry, John Lone, Penelope Ann Miller and Ian McKellen. Lone in particular is great, doing a wonderfully charismatic job as the villain Shiwan Khan. I always thought Penelope Ann Miller deserved a bigger career than she received: despite key roles in Kindergarten Cop, Carlito's Way, Other People's Money and The Relic she never seemed to grab the public's attention.

The film also boasts a great late-career score by Jerry Goldsmith. Despite contributing some of the best music in Hollywood over a decades-long career, Goldsmith could be a hit-or-miss composer. If he brought his A-game, he was outstanding, but more and more often he seemed to be phoning his scores in. This, along with The Ghost and the Darkness, represents some of his best work in this decade.

People probably aren't going to celebrate The Shadow en masse this week. It's likely it will get many nostalgia-filled posts on entertainment or pop culture blogs. I wouldn't be surprised if it slips by without anybody noticing. I noticed. I'm nostalgic. I'm probably going to give it another watch tonight.
Posted by Grant at 8:43 AM