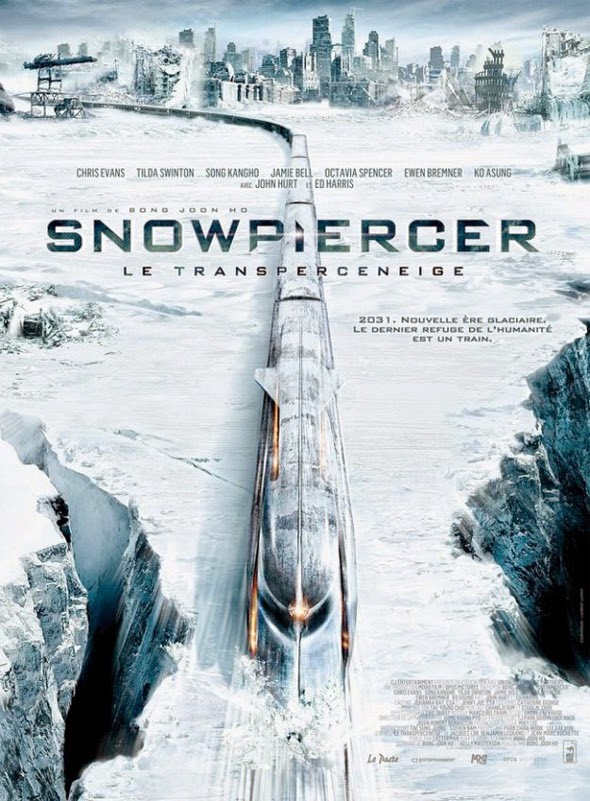 17 years after a catastrophic accident freezes the surface of the Earth, the last survivors of the human race live on the Snowpiercer, a high-tech passenger train in perpetual motion. Those in the train's front carriages live decadent lives of luxury and comfort. Those in the tail live in cramped conditions and abject poverty, exploited by those in the front and kept in charge by violent armed guards. One tail-ender, Curtis Everett (Chris Evans), inspires a popular revolt. If he and his friends can take over the train's engine, they take over the world.

Snowpiercer is one of those marvellous kind of international productions that gets me tremendously excited: it's an English language science fiction thriller directed by a Korean, shot in the Czech Republic and based on a French graphic novel. It is also the best new film I have seen this year. It is tense, intelligently performed, inventively staged and emotionally powerful. Its director, Bong Joon-ho, has previously directed some of the best contemporary films of his home country, including Memories of Murder (2003), The Host (2006) and Mother (2009). They're all pretty much masterpieces of cinema. Snowpiercer is better.

In many respects it's a fairly episodic film, on account of its premise: Curtis has to push forwards, from the back of the train to the front, taking one car at a time. Different carriages have different purposes, and different occupants. This format allows Bong to do what he most excels at: sudden and dramatic shifts in tone from action to drama, then to pitch-black comedy, and even utter horror. It's an emotionally draining experience, but in the best possibly way. Park Chan-wook (Oldboy, JSA) is listed as one of the film's producers, and you can see he's had an influence. The actors may be primarily British and American, but the tone of the film is intensely Korean. I also recognised elements and hints of films like The Hunger Games and Michael Radford's Nineteen Eighty-Four; probably more coincidental than intentional, but there does feel like there's an aesthetic legacy to the film.

The cast is great, with many of them giving surprising performances. Chris Evans plays Curtis as a haunted, guilt-ridden fashion, for reasons that are made clear as the film goes on. He's an excellent actor whom I've always enjoyed watching: here he's more reminiscent of his performance in Danny Boyle's Sunshine than his more recent turns as Captain America. Tilda Swinton is almost unrecognisable as Mason, the callous Thatcher-esque spokesperson for the train's front passengers. John Hurt plays John Hurt, but that's pretty much the way of his performance style: he's still wonderful to watch.

Bong reunites two of his stars from The Host, with Song Kang-ho playing the drug-addicted lock-breaker Namgoong Minsu and Go Ah-sung his naive teenage daughter. Song's performance is, to my mind, the best one of the entire movie. Unlike the rest of the cast, he speaks Korean, and his character is a constant revelation as the film goes on. His character is worlds away from the one he plays in The Host too, which goes to demonstrate his range.

There's a very heightened, allegorical tone to the film. Hard science fiction fans will drive themselves nuts if they try and reconcile exactly how the Snowpiercer can successfully operate. Smarter viewers will take it for what it is and move on: the rest of the film is far too interesting to get bogged down by technical details.

Korean film has been growing in stature and reputation internationally, pretty much for the past 15 years. Its best directors have been making tentative steps into making films on a more international front, whether it's Park Chan-wook directing Stoker or Kim Jee-woon directing The Last Stand. Snowpiercer is the first film of this time that feels like it's emerged fully-formed and with its integrity intact. This is the real deal. This is a must-see.

Snowpiercer has gained an awful lot of attention among cinephiles for the fairly shoddy treatment it has received at the hands of its distributors. It was produced in 2013, and is already available on home video in several markets including France and South Korea. In the USA a protracted disagreement between Boon Jong-ho and Harvey Weinstein over producing an American edit has seen the film delayed by a year - it's only just opened there. Here in Australia, the film is about to receive a limited theatrical release in Sydney and Melbourne - tough luck if you live in another capital city like Perth or Adelaide. My best recommendation would be to e-mail or telephone Roadshow Films, or even your local independent or arthouse cinema, and let them know how keen you are to see it.
Posted by Grant at 3:26 PM