Doctor Who: "The Ordeal" 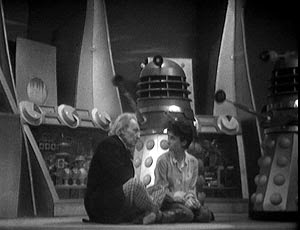 With Elyon dead, the Thal expedition continues their dangerous journey into the mountain ranges behind the Dalek city. When Antodus in injured in a rockfall, it leaves them with no opportunity to turn back - even if the path ahead seems impossible to traverse.

The Doctor and Susan do get a bit more to do. They return to the Dalek city, muck about short-circuiting some electronics, and wind up captives of the Daleks again. Fools.

With this episode Doctor Who's viewing figures in the UK topped 10 million for the first time. Over the preceding month it had shifted definitively from small-budget children's drama to a national phenomenon. This is pretty much entirely down to the Daleks, who continue to impress in their few brief scenes in this episode. There's something really refreshing about watching them before they turn into a pop culture icon nailed to a catchphrase. As with earlier episodes, they actually get whole scenes of dialogue among themselves. As a result they come across as living, thinking creatures rather than the sort of defacto may-as-well-be-killer-robots that they rapidly become.

Barbara gets a nice scene with the Thal Ganatus, with both actors underplaying the romantic angle - which of course makes it even more stark and heartfelt. Barbara also seems to make it clear that, at this stage of the series at any rate, she doesn't really have any romantic inclinations towards Ian. She really is the best character in the series, with Jacqueline Hill giving her such an unexpected amount of nuance.

Apart from that? Oh the padding. You're never going to hurt yourself banging into this episode, because it's just too well padded. Despite a few highlights this episode is eminently skippable. Still, we're 10 episodes into the season and eight episodes have been good: a quality ratio of 80% is pretty damned impressive.
Posted by Grant at 6:35 PM