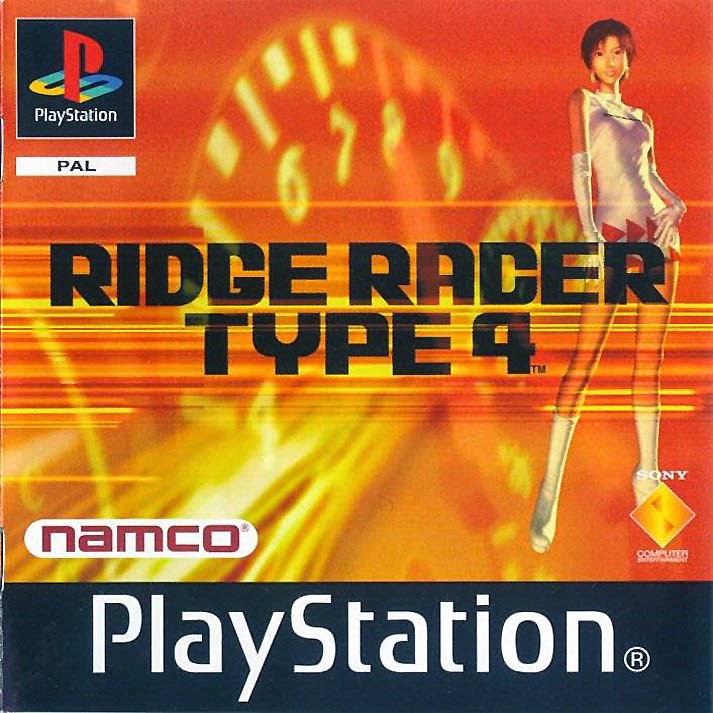 Ridge Racer started life as a series of arcade titles, but like all mid-90s arcade games it rapidly found its way onto the PlayStation beginning in 1994. The original PSX Ridge Racer was one of the key early titles and went a long way towards selling the system in both Japan and overseas. Given its huge success it's no surprise that Namco followed it up with Ridge Racer Revolution in 1995 and Rage Racer in 1996. It was the fourth and final PSX Ridger Racer title, Ridge Racer Type Four (1998), that really grabbed my attention.

That's the thing with videogame sequels - they're almost the opposite of Hollywood, where the quality goes down with each instalment. Videogame quality tends to go up, as technology improves and designs refine. Type Four isn't just the best of the Ridge Racer games. It's my favourite racing videogame ever. I'm sure there are better titles out there, but for sheer nostalgia and the number of hours of entertainment found, Type Four is my sentimental favourite.

For one thing it's perfectly pitched for players like me. Despite loving games, I suck at playing them. Type Four is extremely easy to pick up and play, and it's comparatively easy to win races. Improving on your best laps takes time and skill, of course, and thanks to some very nice track layouts the game has enormous replay value. Ultimately the game is all about powersliding around corners, a technique that was extremely satisfying to achieve.

Type Four also introduced a very light narrative component - you started the game by choosing a team to drive for, and subsequent levels would be introduced and concluded with short dialogue sequences with your team manager. It was a very simple superficial addition, but gave enormous depth to a genre of game that's usually very much a driving simulation and nothing more.

The game even initially came with its own controller, the JogCon, which had a little steering dial in the middle of the controller that was equipped with force feedback - turn sharply and the dial would actually struggle against your thumbs.

The Ridge Racer franchise continued well into the future, and new titles get released every few years (most recently Ridge Racer Unbound in 2012), but for me the series peaked in 1998. I still play this game from time to time, the various tracks slipping back into my memory like a comfortable pair of shoes.
Posted by Grant at 9:27 AM