Star Trek: The Next Generation: Season 2 in review 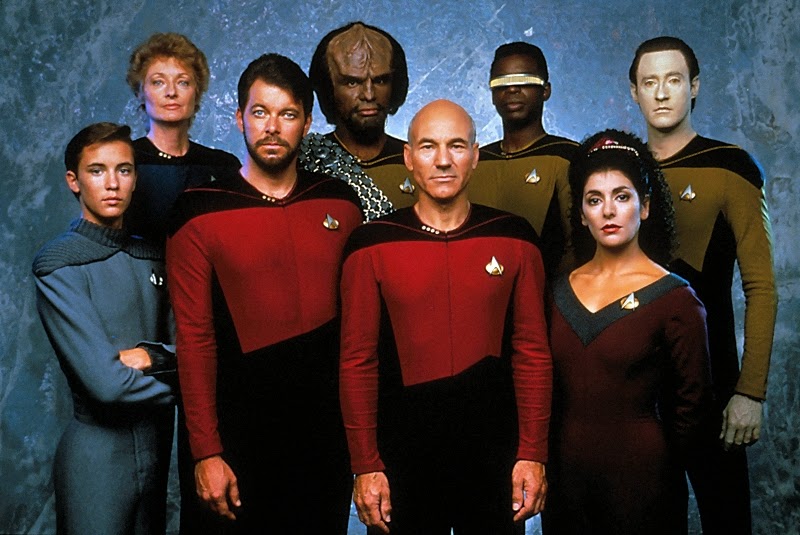 Now that I've finished reviewing all 22 episodes separately, it's worth taking a step back and assessing Season 2 of Star Trek: The Next Generation as a complete piece. It was a season produced under fairly trying circumstances, with an industry-wide writers strike putting the team firmly behind the eight-ball from day one, and the crushing realities of day-to-day television production pretty much ensuring they never got out from behind it all year.

All up, it is fair to say that it was a better season than its predecessor. Then again, looking at it purely from a binary good episodes vs bad assessment, it scored 41% compared to Season 1's 36%. That's hardly significant, and still worse overall than the score I gave Babylon 5's first year - and I hate Babylon 5.

Attempts were made to shake up the series, and while some of them were successful others were not. It's worth going through them all bit by bit.

In terms of casting, Beverly Crusher (Gates McFadden) was written out and replaced by Katherine Pulaski (Diana Mulduar). It was an obvious attempt to bring a little bit of energy into the mix, and the new character was clearly written as an emulation of Dr McCoy from the original Star Trek. The problem is that the character simply doesn't fit all that well. A deliberate choice was made in Season 1 to create characters without interpersonal conflicts, and that reasoning continues throughout the whole seven years of the series. As a result Dr Pulaski winds up sounding like the proverbial squeaky wheel. She doesn't match the cast around her.

What's interesting is that while Pulaski was introduced to fix the problem of characters without conflict being rather boring, other work going on actually fixed the problem anyway. This is the season where the writers allow the regular cast to loosen up. Riker in particular, who's deadly serious throughout the first year, get's refined as someone far more avuncular and relaxed. Simply compare Jonathan Frakes' performance between say, Season 1's "Hide and Q" - where he solemnly tries to improve his friends' lives with the powers of the Q continuum - and Season 2's "A Matter of Honor" - where he casually introduces his workmates to the various Klingon delicacies he's eating. The same process takes place, to one degree or another, for the whole cast. Midway through Season 2 they stop being a humourless crew and actually start feeling like a kind of family: sure it's probably less realistic, but it makes for much more engaging television.

Between shooting Seasons 1 and 2 the Next Generation sets were forced to switch soundstages at Paramount, and once relocated it was discovered there was room for an additional standing set for the series. The decision to use that space to create Ten Forward - basically a bar in which the Enterprise crew could relax and hang out after hours - was a masterstroke. It feeds directly into that shift in the characters from stoic, humourless officers to rounded, pleasant people. Adding Whoopi Goldberg to the mix as Guinan is great as well: she's a sounding board for characters outside of their chain of command, and she's an intriguing source for backstory and information. "Q Who" is a good example, with Guinan's past experience with the Borg allowing the episode to ramp up the menace much faster than if they had to rely on the crew discovering it for themselves.

By the season's end the solid changes made to the characters has, in essence, fixed the series. It was a weird, awkward beast in Season 1, emulating the original Star Trek series within a context that outdated in by 20 years. By the time Season 3 came around, the series had emerged as a fully-fledged and highly entertaining early 1990s TV drama. Season 2 is the difficult transition period in between.

If I was going to pick five episodes in particular for people to avoid, I'd have to cite:
If, on the other hand, someone asked me to cherry-pick five episodes to showcase the season at its best, I'd go for:
I particularly recommend "The Measure of a Man", which is the best episode of Star Trek: The Next Generation I've rewatched so far.

I knew going into this Next Generation rewatch that the first two seasons were going to be a chore. Those seasons are done now, and I've thoroughly enjoyed experiencing them with a fresh, older perspective. The series is about to be reshaped again by executive producer and showrunner Michael Piller, and I can't wait to see what Season 3 holds in store.
Posted by Grant at 6:49 PM