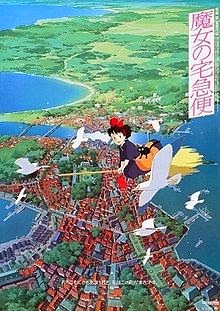 There are few films in the world more delightful to watch than Studio Ghibli films, and there are few Studio Ghibli films as delightful as Kiki's Delivery Service. I've heard it said that the first Hayao Miyazaki film you see will always be your favourite, and while I'm not entirely sure I could pick a favourite these days I can't deny I will always have the warmest of affections for Kiki.

Today it turns 25, since it was on 29 July 1989 that it premiered in Japanese cinemas. It remains one of my favourite films, so it seems appropriate to wish it a happy birthday.

It was a critical production for Studio Ghibli, since its preceding double-bill of My Neighbor Totoro and Grave of the Fireflies had failed to turn a profit, and the high cost of producing animation meant that the studio would close shop if Kiki wasn't a hit. Thankfully it turned a healthy profit, grossing almost three times its ¥800 million yen budget by the time it left cinemas.

The film was an adaptation of Eiko Kadono's 1985 childrens novel, about a teenage witch who leaves home with her talking cat in order to spend a year working without the help of other witches. I've never read the book - it's in Japanese -but I do know that Miyazaki's adaptation is pure delight from beginning to end. It's full of colour, life, humour - it's pretty much the perfect children's film.

This one of several Ghibli films that entered development with a new director attached (in this case Sunao Katabuchi), before Hayao Miyazaki pushed them aside and assumed control of the film personally. His design team took trips to both Stockholm and Adelaide when developing the design for the film's fictional setting, although the final designs were primarily based on the town of Visby in Sweden. The design of Kiki is one of my favourite elements - it feels genuinely fresh and real. I don't think another Ghibli film bested its aesthetic until Spirited Away (still the studio's high water mark for me).

I have no doubt that people will still be discovering and loving this film in another 25 years. It's a genuine classic of animated cinema.
Posted by Grant at 5:30 PM