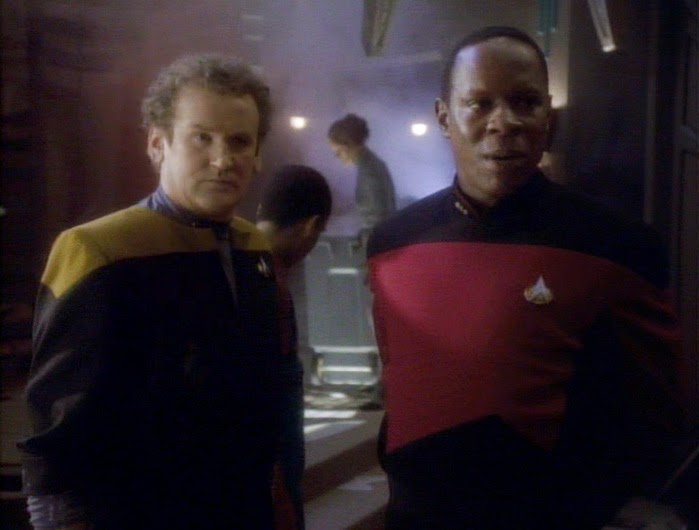 A while back I reviewed the second season of Star Trek: Deep Space Nine, pretty much out of curiosity over how it compared to the first season of Babylon 5, which was broadcast at pretty much the same time. It's still my favourite of the Star Trek series, and while I've been enjoying my episode-by-episode rewatch of The Next Generation I felt like a slight break and have jumped back to the very beginning of Deep Space Nine. Yes, I know, not much of a break - one Star Trek to another. It's really striking how different a series it is, when watching with "Emissary", the 90 minute premiere episode.

Three years after losing his wife during the Battle of Wolf 359, Starfleet Commander Benjamin Sisko (Avery Brooks) accepts a position commanding the new Starfleet facility Deep Space Nine. When a wormhole is discovered a few light years from the station, it sets off a crisis that will make or break Sisko and the station he commands.

Launching Deep Space Nine must have presented a particular challenge for the Star Trek production team. It had to offer viewers something different to The Next Generation - and thus justify its existence - but also offer something familiar and comforting as well. So what's the same? Well they shift Miles O'Brien (Colm Meaney) over from The Next Generation to the new series, in a regular and expanded role. They bring Patrick Stewart over to cameo as Captain Picard. The general thrust of the Star Trek universe is still there.

What's changed? Pretty much everything. The Next Generation was a deliberately optimistic series where the Enterprise crew all got along as great friends. Deep Space Nine is a comparatively cynical series where hardly anybody gets along at all. We're introduced to Sisko at the pivotal Battle of Wolf 359. Three years later he takes over a station that's been all but crippled by the retreating Cardassians, populated by Bajorans who don't want him there, and brought face-to-face with Captain Picard who - as Locutus of Borg - murdered Sisko's wife. His meeting with Picard is actively hostile. His first meeting with Major Kira (Nana Visitor) is fairly rocky. He doesn't get along with security chief Constable Odo (Rene Auberjonois) to begin with, nor local bar owner Quark (Armin Shimerman). It's a deliberately messy set-up, and unlike Star Trek or The Next Generation there's no flying off to another location at the end of the episode.

And what a mess. Perhaps the greatest achievement of this series is how much time it allows itself to expand and explore the two key planets of Bajor and Cardassia. In many respects its an allegory for the Middle East - the colonial rulers have finally been pushed out, and the remaining political forces are threatening to tear the survivors apart. There are no easy solutions, and as the series progresses it regularly takes unexpected story choices.

There's also the issue of religion: it's usually something a 'third rail' in science fiction television, either quietly ignored or rendered in such a fashion to be clearly ludicrous. Not only is the spiritual faith of the Bajorans a core aspect of the series, this premiere episode positions the atheist Sisko as a major religious figure within that faith. Again, it's a provocative set-up without easy solutions, and I don't think there's a better representation of alien religion anywhere else in SF television.

That's all bold stuff, but what makes this episode - and the series it launches - work for me are the characters. There are real and effective relationships going on here. Not all of the characters work from the outset - Dr Bashir (Alexander Siddig) is a key example of one who doesn't gel yet - but it's a much more solid start than we got with The Next Generation, and it only gets better.

This is a great first episode that juggles a lot of balls - new characters, a complex setting, a different visual aesthetic and tone - and catches every single one. It's a fantastic start to what remains my favourite iteration of the Star Trek franchise, and one of my favourite TV shows of all time.