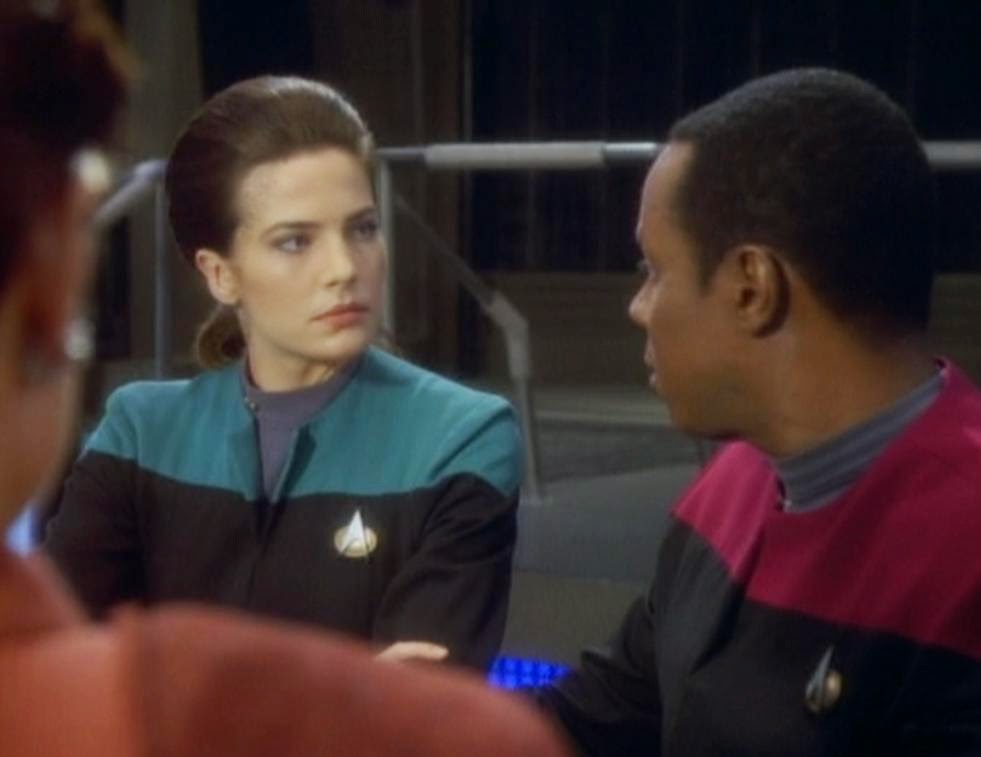 Chief O'Brien is overrun with repair duties across the station. While fixing a food replicator he accidentally triggers a long-dormant booby trap - one that unleashes a virus that renders its victim incapable of understanding or expressing intelligible speech. While Kira, Bashir and Sisko race to find a treatment, the entire station falls under quarantine - and those infected begin to suffer more severe and life-threatening symptoms.

"Babel" is a bit of a break from the more character and backstory-heavy episodes that launched Deep Space Nine. While there's still some good character development and enrichment going on here, it is at heart a very self-contained and wonderfully tense medical thriller. Director Paul Lynch teases out a fabulous sense of rising tension in this episode: there's a growing horror that builds each time another member of the cast falls victim to the mystery virus.

The idea for a virus that made its victims speak gibberish had been floating around the Star Trek production office for three years by the time it was adapted into this episode. Like most of Deep Space Nine, the real highlights of the episode are all moments of character. The episode begins with O'Brien's growing frustration at how badly degraded the station's system are, and giving him the kind of spotlight he never quite received as a supporting player on The Next Generation. We also get more time to see Odo and Quark's strange friendship develop - and it is a friendship, albeit one that involves a lot of verbal sparring and mistrust. While the series will explore their relationship more fully in the future, the core of it is there from the outset. The episode's climax, in which Odo and Quark are pretty much the only ones left standing, is marvellous.

The most beautiful part of the episode, however, is the father-son relationship between Benjamin and Jake Sisko. Until now it's been a very traditional TV sort of representation: the father telling the son off, the son complaining that their new home is boring, and so on. Here Jake succumbs to the aphasia virus quite early, and Benjamin's reaction is one of genuine and heartfelt grief. It's such a tactile relationship, and when Benjamin hugs his son and kisses his forehead it feels like the most natural thing in the world.

And here's the thing: we hardly ever see this kind of affection in American SF television. Star Trek to a large extent created the original mold for the genre, and whether it's Babylon 5 or SeaQuest DSV, or even a present-day procedural like The X Files, American SF tends to be dominated by professional adults in a workplace (most often pseudo-military) environment. They don't spend a lot of time on families, and so the Benjamin/Jake dynamic really does feel like something different. We never got this level of emotional honesty between Beverly and Wesley Crusher. There really isn't anything like it that I can think of.

Deep Space Nine is one of my all-time favourite pieces of SF television, and it's not because of its SF concepts, or its spaceships, or it's phaser-shooting action-adventure. It's the little bits of emotion, like a father fearing for his son's life, and kissing his forehead.

Four episodes in, and we're still four for four. Such good television.
Posted by Grant at 9:10 AM