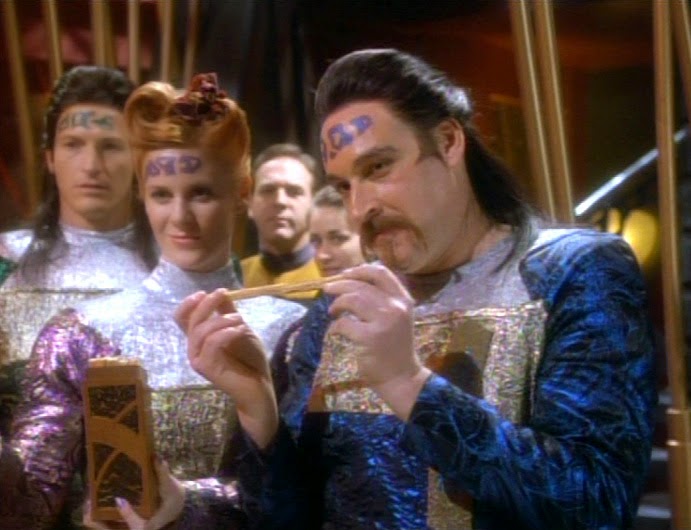 Deep Space Nine plays host to the first-ever delegation from the Gamma Quadrant - the myserious Wadi, whose interests seems less in diplomacy and more in the games at Quark's Bar. When they catch Quark cheating them out, they force him to play a game of their own - with the lives of Sisko, Dax, Bashir and Kira in the balance.

I'm not quite sure what to make of "Move Along Home". It's relatively awful - in fact I remember it being widely regarded as the worst episode of the season when it was first broadcast. At the same time there is a kernel of potential in what's presented. You can see a solid and inventive episode buried inside, but the episode as broadcast is basically an hour of silliness without a point to it. I despair that I will never see another decent episode this season.

The Wadi dress like glam rock fops, with graffiti on their foreheads and 1970s heavy metal beards and hair. It's like the laziest kind of Star Trek alien: there wasn't even enthusiasm to give them bumpy noses or weird foreheads. Instead they get blue paint and handlebar moustaches. We don't really get a context for who they are, other than the fact that they're from the Gamma Quadrant and that they're visiting the station. They seem to really like gambling, with a collection of weird fruit juices and bundles of sticks as currency. I sense that someone had fun with this episode seeing just how randomly silly and low budget they could make the Wadi: they are pretty much the lowest-budget, silliest Trek aliens of whom I can think. This whole episode reportedly suffered from a budget crunch. It shows.

Once Quark starts playing their strange board game Sisko, Dax, Bashir and Kira wake up inside a maze-like dream world. Room by room they face challenges and tests: they have to copy a skipping girl and sing her nursery rhyme, or drink wine in a party to avoid choking on poisonous smoke. Here is where the episode could have made some sort of inventive SF: imagine that by playing the game Sisko could have learned intimate details of Wadi culture. Perhaps by playing the game, he could understand the sort of people they were. Instead it's just a string of random scenes that lack sense or tension. A third-act escape through a rocky cave system makes even less sense, and is even less interesting.

Then, at the end of the game, it turns out it was just a game. No one was in danger, nothing was learned, nothing was gained. The Wadi depart, and the episode ends. What was it for? What did it mean? This is a strange, utterly irritating episode that brings to mind the classic Mitchell and Webb comedy sketch "Numberwang" - only not as funny.

This episode marks the final appearance of Lt George Primmin - he lasted exactly two episodes before vanishing without a trace.

Nine episodes in, only five good ones followed by a four-episode stretch of bad ones. The quality ratio drops down to 56%. On the bright side, that's still better than the first two seasons of The Next Generation, which finished up with 36% and 41%.
Posted by Grant at 9:54 PM