The Muppets Take Manhattan: 30 years on 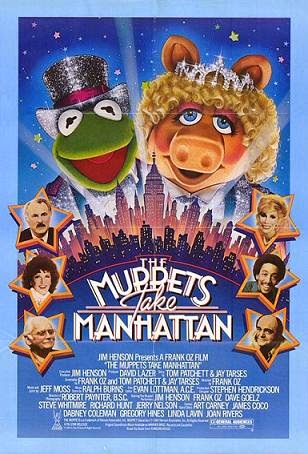 Today it's been 30 years since The Muppets Take Manhattan, the third feature film based on Jim Henson's Muppet characters, was released into cinemas. Today is aso the 30th anniversary of failed sci-fi blockbuster The Last Starfighter, but to be honest I'd rather talk about Muppets.

I think it's interesting to look back on this film in hindsight, because at the time there was very much a sense that this was the Muppets' last hurrah. Jim Henson aand his growing troupe of puppeteers had been performing as the Muppets since the late 1950s, and by 1984 he was well and truly prepared to move on. He had made a jump from television to directing feature films - first with The Great Muppet Caper and then with his acclaimed fantasy The Dark Crystal in 1982. At the time of The Muppets Take Manhattan's production he was neck-deep in preparations for directing Labyrinth for Lucasfilm Ltd, and happily ceded control of the third Muppet movie to his long-time colleague (and co-director on The Dark Crystal) Frank Oz. That's significant in itself, because Oz didn't stop directing with The Muppets Take Manhattan. To date he's directed another 10 movies, including some absolute classics including Little Shop of Horrors, Dirty Rotten Scoundrels and Death at a Funeral.

This was a markedly different film to the previous two Muppet movies. It concentrates less on a constant stream of visual gags and quips and more on trying to give some sort of depth to the Muppet characters. There isn't so strong a sense of the Muppets' own personalities peeking out from behind their characters, and one line aside they never really break character or muck around. Instead it presents them as American college students trying to float their end-of-year revue on Broadway. This approach has its benefits and drawbacks. On the one hand it does allow for a slightly more complex story, and interest turns for the characters - particularly Kermit the Frog. On the other hand, it's a lot less funny that the previous two films, and while it's tempting to talk at length about the pathos generated by Kermit's predicament, he is at heart a sock puppet with no purpose other than to engage in cheap gags and old jokes.

The film concludes with a faux wedding between Kermit and Miss Piggy - or is it? People have argued for three decades now whether it was staged or if Kermit and Piggy are now actually married. While doing the press junkets for the film, using their respective Kermit and Piggy puppets, Henson and Oz would play off each other: Henson as Kermit claiming it was just a scene in a movie, Oz as Piggy insisting the wedding was real. It was a movie-sized effort in trolling an audience, and it's worked for an entire generated. There is no right or wrong answer. The climax of the film only exists for Henson and Oz to laugh at us for caring so much.

Perhaps the greatest contribution the film made to pop culture, however, was a mid-film dream sequence in which Piggy imagines what life would have been like if she and Kermit had met as children. This "Muppet Babies" sequence was an animated series within months, one which ran for eight seasons between 1984 and 1991. It was a brilliant animated series with a neat way of placing the baby characters into footage from live-action films with a nice line in parody and satire. It was also mercilessly copied some years later by Nickelodeon's smash hit Rugrats. The enormous amount of licensed footage has also made Muppet Babies prohibitively expensive to release on home video, which is why there hasn't been a single episode seen in the wild in about 20 years.

There were a few TV specials made after The Muppets Take Manhattan, and an abortive attempt at a relaunch with The Jim Henson Hour, but for all intents and purposes this was the end of Jim Henson's Muppets. At the time of his death he was negotiating to sell the characters wholesale to the Walt Disney Company. It was only after his death that they returned to cinemas in the exceptionally good A Muppet Christmas Carol, directed by his son Brian, followed by the less exceptional Muppet Treasure Island and Muppets from Space.
Posted by Grant at 5:06 AM