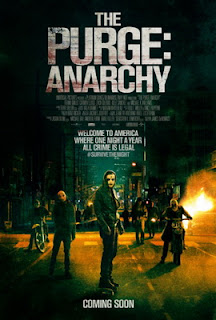 It is the night of the USA's annual Purge, in which all crimes are declared legal for a 12 hour period. While most of the nation's civilians cower fearfully inside their homes, other step onto the streets armed with handguns, rifles, knives and baseball bats to commit random violent crimes or even to engage in premeditated murder against people they dislike. A car breakdown leaves a young couple stranded on the freeway just as the Purge is set to begin. A mother and daughter have their home invaded and are dragged out onto the streets. A mysterious well-armed man sets out into the night in an armoured car with murder on his mind. Over the course of the night, all five people's lives intersect as they band together and attempt to survive.

The Purge: Anarchy is the 2014 sequel to The Purge, a small-scale near-future thriller. Both films are directed by James DeMonaco. Buoyed by the success of the first film and armed with a bigger budget, this second film is in pretty much every way its superior. Whereas the original was a serviceable home invasion movie, Anarchy is a fully-fledged near future thriller with pointed social satire on its mind.

Let's begin by recapping the general premise of these films. In the near future of the United States, crime grows so high that a new government comes to power with a mandate to stop the carnage at any cost. They - known as the New Founding Fathers - introduce the Purge, a 12 hour period of legally sanctioned robbery, assault, rape and murder that allows all citizens to engage in the most violent and depraved manner they want, get it out of their system, and move on with their lives in peace on every other day. The first film pointed out that a by-product of the Purge is that the rich basically get to kill the poor with indemnity. The sequel not only revisits this idea, but reveals that the rich killing the poor is actually the intention of the Purge.

This is a pointed attack on the growing disparity of wealth in the developed world, with the rich growing ever-more powerful and the poor struggling more and more to simply make ends meet. Of course the Purge is entirely unrealistic, but that is basically how this kind of satire works: it was not believable that the government would feed the people reprocessed human flesh either, but that never stopped Soylent Green. The Purge: Anarchy is a satirical attack on America's one-percent, and as it begins to challenge that status quo, so it opens the franchise up to what feels like an essential third instalment. (The Purge 3 is out this July.)

As mentioned above there are three main storylines running in parallel. The first follows Shane (Zach Gilford) and Liz (Kiele Sanchez), a married couple about to separate. Their car is sabotaged just as they are on their way to Liz's sister's house to wait out the Purge in safety. Instead they find themselves running on foot from street to street with a gang of masked hoodlums in hot pursuit.

The second follows Eva (Carmen Ejogo) and her daughter Cali (Zoe Soul), who live in a cheap, rundown apartment and whose financial situation has become so dire they are close to eviction. Eva's terminally ill father sneaks out immediately prior to the Purge, so that he can be a sacrifice for a rich family in return for a hundred thousand dollars. Before they can mourn his death their apartment is invaded not once but twice; first by a drunken neighbour and hot on his heels by a death squad in black body armour and armed with heavy machine guns. These well-funded death squads, which drive through the streets of Los Angeles in ominous black trucks, are a constant and terrifying feature throughout the film, and their true purpose and master hangs as a question over everything that happens.

While all four lead actors do a strong job in their roles the real standout of the film is Frank Grillo as an anonymous gun-wielding man referred to only as "Sergeant". Whether he is a police office or a soldier is never revealed. He heads out into the Purge with a driving purpose, but gets sidetracked when he crosses paths with the other four characters. Grillo plays the part exceptionally well. He has a strong screen presence and works this kind of B-grade violent thriller for everything it's worth.

This is a very violent film, and the sorts of crimes it presents have taken a step further towards the nasty when compared to the first movie. It is also much more direct in its social commentary, and it presents a picture of a much larger, broader world. The Purge offered a glimpse of a dystopia from a rich, upper class perspective. Anarchy is The Purge for the working classes. It is a much stronger and more effective movie because of it. I thought The Purge was okay. I think Anarchy is a genuinely good film: pulpy, smart and provocative.
Posted by Grant at 6:57 PM