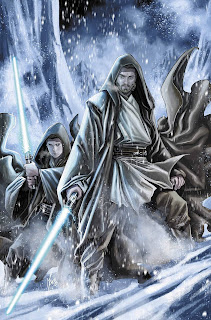 Welcome to the final Pull List column for 2015 comics.

Another month, another Star Wars miniseries. I really like the way that Marvel is undertaking their line of Star Wars comics. As a huge and resurgent property the temptation must be there to simply flood the market with a dozen ongoing series and bleed the concept until the audiences moves on. Instead they've restricted themselves to three ongoing series - one of which is just wrapping up - and a successive line of five-issue miniseries.

The miniseries concept works beautifully for Star Wars, enabling top-flight talent to drop in, tell an entertaining story based around one of the key characters, and then have the whole arc published a month or two down the track as a graphic novel. The miniseries kicked off with Princess Leia, then Lando, Chewbacca ended this past week, and at the same time Marvel have launched the fourth series: Obi-Wan & Anakin.

It takes place between The Phantom Menace and Attack of the Clones, with Jedi Master Obi-Wan Kenobi training and guiding the aggressive and ambitious teenager Anakin Skywalker. Their mission has sent them crashing onto a distant and mysterious planet, while flashbacks reveal the growing concerns the Jedi Council have over Anakin's progression towards becoming a Jedi. Charles Soule's script slots in well into the prequel era - albeit with much better dialogue - while Marco Checchetto's manga-esque artwork provides a very attractive take on these familiar characters. It looks like Marvel may be onto another hit. (4/5)

Under the cut: reviews of Batman and Robin Eternal, Chewbacca, Rat Queens and Ringside.

Cassandra Cain returns to the Nursery, only to find her 'father' David waiting for her with a grisly revelation. This is a dark, fairly bleak issue that boasts great artwork by Marcio Takara and colours by Dean White. It helps to flesh out and refine this New 52 version of Cassandra, and I have to say they have re-introduced her in an exceptional fashion. With Cass, Harper Row and Stephanie Brown all running around the DCU now, I really hope someone at DC editorial has the sense to give them their own team book. They're much too good to waste. (4/5)

This is one of those slightly frustrating final issues where the plot is resolved within the first two pages, leaving the rest of the book for an overly long, relatively tedious denouements. The art remains stunning, and the characterisation of Chewbacca is spot on. The references to The Star Wars Holiday Special are not quite so welcome, and feel both unnecessary and out of place. This has been a general fun miniseries, but the ending is easily the worst issue of the five. (2/5)

Dee reconnects with her brother. Hannah talks to her dead mother. Betty and Violet face off against a dragon. I still like Rat Queens a lot, but this current arc - which has suffered delays and artist changes - has easily been the least effective of the three. The dialogue doesn't seem quite as cutting, the humour not as inappropriate or funny, and Tess Fowler's artwork simply doesn't engage visually in the same way that it did from Roc Upchurch or Stepjan Sejic. It actually feels as if it's staggering a little, with all the delays and changes causing the story to lose its balance. Hopefully in an issue or two it can right itself and go back to being the hilarious angry fantasy story it usually is. (3/5)

Joe Keatinge's combination of crime drama and professional wrestling continues. It is just such a clever combination of subject matter that I'm stunned no one has attempted it before. The book follows Dan Knossos, a former pro wrestler who's returned to Oakland on as-yet unexplained but seemingly violent business. It's a great book, with Keatinge puncturing the characters' bravado as soon as he builds it up. It gives the whole thing a nice realistic edge, which is helped by Nick Barber's nicely simple artwork. (4/5)
Posted by Grant at 7:24 AM