Babylon 5: "The Fall of Centauri Prime" 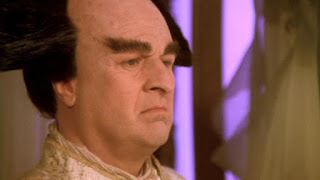 As Sheridan (Bruce Boxleitner) races to stop the Drazi and Narn fleets from obliterating Centauri Prime, Londo (Peter Jurasik) makes a choice to save his people - by sacrificing himself. Meanwhile Delenn (Mira Furlan) and Lennier (Bill Mumy) remains lost in hyperspace. For Lennier it is finally time to speak out loud the thoughts he has kept secret for several years.

It must have been enormously frustrating for viewers back in 1998. The previous episode, "Movements of Fire and Shadow", was aired back in June 1998 giving viewers an intolerable four month wait to find out the resolution of its cliffhanger ending. Thankfully it seems it would have been worth the wait: "The Fall of Centauri Prime" is a deeply felt tragedy that builds on five seasons on plot and character development and seems to act as the final curtain for Londo Mollari's story arc. He started as an irresponsible drunken career politician, more interested in his own advancement than his people's welfare. He ends pretty much at entirely the opposite end of the spectrum: a man so desperate to save his own people that he will sacrifice himself to alien control for the rest of his life.

It is Peter Jurasik's episode and he does a stunning job. Here he is, dressed in a silly costume, wearing a ridiculous wig, putting on an accent, and through all of those barriers he still manages to deliver an awards-worthy performance. He has been the core of the series since it began: it is Londo who narrates the opening of the original TV movie, and it is Londo who ends this final war of the series. I can't help but feel that the next four episodes of the series are going to be the epilogue, or at least I hope they are. Now that Londo's story is told a huge part of the series seems to be finished.

It is rather heartbreaking watching him send away his friends and colleagues, without being able to explain why or ask for help. The episode ends with him alone on his throne in a darkened room, enslaved to the Drakh for the rest of his life. It's impressively written and performed, because we knew all the way back in "War Without End" that we were going to get here. We already knew for the last two seasons how Londo was going to die. Now the final puzzle piece has been slotted into place, and it all makes a final, depressing sense. To save his people Londo, the ultimate social creature, must spend the rest of his life alone.

The Drakh are interesting villains, but they do feel a little underwhelming after the threats of the Shadows and the Vorlons. The Drakh did not get anywhere near as much exposure as those earlier antagonists. Delenn met them briefly in "Lines of Communication", Since nobody talks about them in fearful tones as they did with the other enemies, they don't feel quite so ominous. They also suffer from being essentially out-and-out evil. The shades of grey that have typified Babylon 5 as it has progressed are not in play here, and the series does not seem as good without them.

The episode also suffers a little here in that there's basically only on Drakh seen here, and he is a robed lizard played by Wayne Alexander. This is about the fourth character in the series played by Alexander, and it is definitely a role too many. Seeing the same actor play one alien character after another simply makes this episode feel less realistic and engaging. He's a decent actor, but he's being terribly over-utilised.

There is a neat symmetry at play in the background. The Drakh have secretly infiltrated Centauri Prime because they want a planet of their own. They were servants of the Shadows, and over on the other side of the Shadow War were the Vorlons. Their servants, in a manner of speaking, were the telepaths they seeded among all the major species in the galaxy. The telepaths are now searching for a planet to call home as well. Two children of greater races, both homeless, both seeking a place to call home. It's a nicely subtle touch.

In a brief subplot, Delenn and Lennier remain trapped on a severely damaged White Star, which is slowly drifting away from the hyperspace lanes and into almost certain death. When things are at their worst Lennier finally blurts out that he loves Delenn - at which point they are spontaneously rescued. It's difficult to work out what tone the episode is aiming for with this. Drama? Comedy? It kind of manages both at the same time. Certainly it's rather awkward for poor Lennier.

The episode largely works because it's a climax, and it has already had other episodes do the heavy lifting for it. It's lifted further by Jurasik's excellent performance. All in all it's a tremendously satisfying hour of television despite its flaws. 18 episodes into Season 5, and 10 have been good. The quality ratio rises once more to 56 per cent.
Posted by Grant at 7:56 AM