Star Trek: The Next Generation: "In Theory" 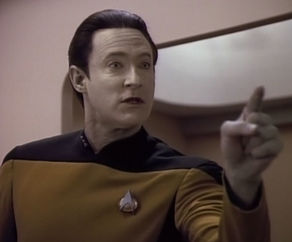 It's 3 June 1991 and time for another episode of Star Trek: The Next Generation.

While the Enterprise explores a nebula packed with dark matter, Data (Brent Spiner) explores his potential for romance by dating one of the Enterprise's security officers.

"In Theory" is one of those Star Trek episodes that works on paper, but that fails in its execution. The basic concept feels like one of the most obvious log lines imaginable: the emotionless Commander Data, as part of his ongoing attempt to understand humanity, tries having a romantic relationship. Certainly there is a lot of potential in the idea. It falls down thanks to a B-plot that doesn't connect at all with the main storyline, a few really cringe-worthy scenes of Data trying to be seductive and failing, and a guest character who comes across as fairly unlikeable due to the manner in which she is written.

The episode's biggest problem is with officer Jenna D'Sora, played by Alien Nation's Michelle Scarabelli. She is a close friend of Data's, which I am perfectly willing to accept despite her never appearing before or subsequent to this episode. She has just broken up with her long-term, reportedly insensitive boyfriend Jeff. While working and spending leisure time with Data, she suddenly hits on the idea of dating Data instead. It feels weirdly under-motivated, and it ultimately feels rather unpleasant. She knows going in that Data has no idea what he is doing, no experience of being somebody's boyfriend, and is mechanically incapable of the emotional affection that would enable him to engage in a relationship on an equal level. This gross imbalance in power in the relationship ultimately makes Jenna seem a manipulative and unlikeable person - and that is clearly not the intention of the episode's writers (Joe Menosky and Ronald D. Moore). Michelle Scarabelli never quite manages to work her performance around the dialogue, instead pushing right through it and failing to lift the character beyond what she is on the page.

Brent Spiner gives his all playing Data in boyfriend mode, but it is simply not enough to overcome some of the more embarrassing scenes of him relying on cliche and stereotype to be the perfect sensitive lover. Much more successful are the short comedic scenes in which Data approaches his various friends and colleagues looking for romantic advice. Unsurprisingly it's Riker (Jonathan Frakes) who gets the episode's biggest laughs.

The B-plot sees dark matter punching temporary holes in reality, sending objects clattering through tables and killing crew members by wedging them halfway through floors. It's a superficially neat idea, but it only exists her as filler. The climax, in which Picard (Patrick Stewart) guides the Enterprise out of the nebula from a shuttlecraft, is relatively leaden to watch and fairly perfunctory.

To the episode's credit it doesn't pull its punches at the denouement. Jenna, realising she will never get what she is looking for from an emotionless android, breaks up with Data. He, completely incapable of feeling emotions like remorse, resentment or regret, quietly plays with his cat. It's a surprisingly effective punch in the gut to conclude an episode that generally has not earned it.

25 episodes into the season, and 18 episodes have been good. The quality ratio drops slightly to 72 per cent, with only the season finale to go.
Posted by Grant at 10:27 AM