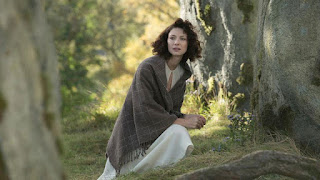 In 1945 Claire Randall (Catriona Balfe) and her husband Frank (Tobias Menzies) take a holiday to Scotland to reconnect with one another following the Second World War. When Claire visits a stone circle one afternoon, she finds herself inexplicably thrown centuries in the past and into the Scotland of 1743 where roving English patrols are hunting down the Jacobite rebels.

Outlander is an American/British co-production based on the romantic time travel novels by Diana Gabaldon. The series caught my eye when it was first released in mid-2014, but it has taken until now for me to sit down and watch its first episode. I was interesting in seeing the series due to an interest in both time travel stories and Scottish history, and also because the series has been supervised by writer and executive producer Ronald D. Moore whose previous work on Battlestar Galactica and Star Trek: Deep Space Nine have impressed me a great deal.

As a pilot episode "Sassenach" is overly long and a bit clunky, but it points to some pretty solid historical drama down the line. It is definitely worth giving it a watch and seeing where the series goes.

Claire is a great character. She is, by this first episode at least, a very strong and likeable protagonist. She is a war veteran, having served on the front as a nurse, and she is intelligent, resourceful and level-headed. She is also strongly self-motivated. In the first two-thirds of the episode she initiates sex with her husband not once but three times. There are two ways of looking at this. One is to roll one's eyes at yet another cable-based television drama throwing sex in for a quick viewership boost. That is actually a pretty fair accusation to level, since it does leave Outlander falling into a very familiar pattern: cable dramas seem obsessed with throwing in sex and violence to get an audience's attention, and somebody really needs to tap them all on the shoulder and let them know it's unnecessary. The other point of view is to actually look at the placement and tone of the sex scenes, and see that they are actually doing something quite different. In one key scene Claire tempts her husband over while they are exploring a ruined castle, and rather than kiss him guides his head down to perform oral sex on her. It's a frank scene but not a graphic one, and it gives a female protagonist power in the exact sort of scene where typically she would have none. That strikes me as a pretty major shift, and it's worth applauding. Claire is also helped by Catriona Balfe's excellent performance.

Tobias Menzies is also great. He plays a dual role, not just playing Frank in 1945 but also 18th century Captain "Black Jack" Randall, who seems set to be the villain of the series. Menzies does a great job playing two radically different men in the same episode, and it's a wonderfully constructed moment of horror for Claire to meet Captain Randall and realise that despite appearing identical he is not her husband. Sadly Randall is a particularly stereotypical character, basically replicating Jason Isaacs' loathsome English villain from Roland Emmerich's The Patriot. The evil English captain has become such a tired trope in these sorts of historical adventures that despite his confronting behaviour - within about 20 seconds of meeting Claire he's attempting to rape her - he simply is not that interesting. If he is to be a regular antagonist, I hope he gets more interesting material.

Claire is rescued from Randall's clutches by a group of Jacobite rebels, including dashing young swordsman Jamie (Sam Heughan) who seems set to be Claire's historical love interest. Heughan has a strong screen presence, although it is a bit early to see whether he is going to be an interesting three-dimensional character or another stereotype like Randall.

The episode tells a fairly predictable story, and it tells it in a strangely structured manner. Much of the episode is spent in 1945, with history buff Frank explaining huge amounts of foreshadowing to Claire so that the audience does not get too confused once they head back with Claire to 1743. By the time Claire travels back in time there's barely any time left in the episode to properly establish the local characters or explore her emotional reaction to what has happened. There's not enough for a proper second half, but far too much for it to function as a cliffhanger ending. It is a weirdly shapeless narrative.

The evolution of American television drama from network procedurals to cable and streaming-based serialised narratives has had a pretty profound effect on narrative structure. The concept of 'binge viewing', in which a viewer will consume several episodes of a series at a time - sometimes a whole season in one sitting - has meant that the traditional three-act structure no longer seems as ubiquitous. Now individual episodes simply have to fill an hour up with plot, without any direct need to be firmly structure into three acts. It works fine if the viewer actually is watching several episodes in a row, but when watched one episode at a time it does make individual instalments feel slightly weak.

In the episode's favour is some absolutely beautiful photography. Director John Dahl (The Last Seduction) really draws a lot of atmosphere out of his Scottish setting, that feels authentic without ever getting too much like a tartan-pattered chocolate box. The only place where the Scottish setting feels overdone is in Bear McCreary's disappointing musical score, which draws a little too enthusiastically from traditional Scottish folk songs. Nowhere is this more egregious than in the series' opening titles, which play out to a version of "The Skye Boat Song" with modified lyrics. It makes one imagine the furthest the search for a title theme went was track one of a Scottish folk greatest hits album.

One massive problem that hangs over the episode is its voiceover. Claire narrates her entire story, step by step, and in pretty much every case it is a redundant addition. There is rarely an excuse for narration in film and television, and in every case in "Sassenach" Claire's voiceover adds nothing that is not immediately obvious from the images. It also closes off audience receptions. A particular glance or pause might make different viewers read the moment in different ways. With Claire also telling us what the glance or pause meant, multiple readings simply aren't possible any more. I hope the voiceover goes away; I have a sinking suspicion it will not.

Despite these quibbles I found much of Outlander's first episode fascinating and enjoyable. It needs to pick up its pace though, as well as drop the voiceover. On the other hand the lush visual imagery, the strong female protagonist and the historical setting are all very much welcome to stay.
Posted by Grant at 8:35 PM