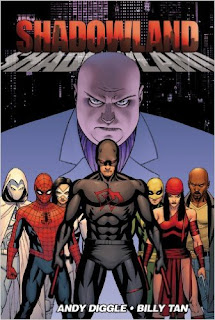 After being given control over the Ninja clan known as the Hand, Daredevil establishes control over Hell's Kitchen and declares his own martial law - little knowing that an evil demonic force is starting to influence his actions. When Daredevil kills his arch-nemesis Bullseye his fellow superheroes attempt to intervene. It may already be too late to save him, or themselves.

Shadowland was a five-issue miniseries published by Marvel Comics in 2010. It capped off a run on Daredevil by Andy Diggle and formed part of a serialised chain of Marvel events during the period including Secret Invasion, Dark Reign and Siege. Several tie-in miniseries were also published, showing the effect of Daredevil's actions on a variety of Marvel characters. I have not read those, but I have just finished the central miniseries. It did not particularly impress me.

Shadowland is a typical Marvel event miniseries in which the core issues simply tell the key story beats without any depth or background information. For side-stories or narrative colour readers are forced to read the various spin-offs and tie-ins. What is presented here is a bunch of superheroes turning up one after another to say a few lines, have a brief fight, and wait until it's time for a climax.

Part of the problem is Daredevil himself: he's simply been ground up through too much misery over the years to be believable any more. After Shadowland the book fell into the hands of Mark Waid, where it finally managed to become a breezier, funnier and much more well-rounded book. There's only so much misery a character can take, and this series is simply the culmination of a long chain of writers standing over a dead horse and wailing it with clubs.

Another problem is the lack of focus. There are too many characters running around in the miniseries without getting their stories fleshed out or elaborated upon. When you squeeze this much in, everything becomes cursory and superficial. There's no depth to the book, and without depth there's very little with which to engage the reader.

Certainly Billy Tan's artwork is unlikely to help too much. Christina Strain's colours do a very effective job of masking some of the art's more egregious flaws, but the proportions are regularly wildly unrealistic (check out Iron Man's teeny tiny head in issue 1) and the panel layouts a little too crowded with close-ups and mid-shots.

If the script is superficial, and the artwork is unimpressive, there really is not a lot left with which a comic book series can recommend itself. Shadowland is a pretty big disappointment.
Posted by Grant at 7:39 AM