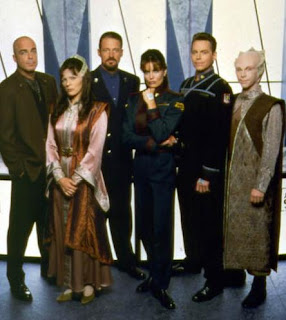 Where does one begin?

The short version: Babylon 5 was initially conceived and promoted as a five-season series with a serialised storyline. It was to have a beginning, a middle and an end; essentially a novel made for television. Halfway through making Season 4 it became clear that PTEN, the cable network that originally commissioned Babylon 5 was not going to survive into 1998. Without a new network immediately willing to pick the series up for one more season it appeared that Babylon 5 would conclude at the end of its fourth year. As a result, series creator and writer J. Michael Straczynski made some edits to the plot of Season 4. A storyline about the Minbari civil war was truncated fiercely, and the intended first four episodes of Season 5 moved back into the end of Season 4. Those changes would at least conclude the liberation of Earth from its corrupt government and give the series a broad sense of closure.

A last minute reprieve came via TNT, which commissioned a fifth and final season quite late in the day. The series finale "Sleeping in Light" was put aside for a year, a hasty replacement recorded and slotted in its place, and Season 5 was left to kick-start a series that had for all intents and purposes already wound down to conclude.

So how does Season 5 fare under those circumstances? Not too well, to be honest.

The biggest problem the season has is not the plot. As noted above, only four episodes were shifted out of the originally planned story arcs, and those were quickly filled by a few one-off episodes like Neil Gaiman's "The Day of the Dead" and Straczynski and Ellison's "A View from the Gallery". The season's biggest challenge was that on an emotional level Season 4 wrapped up the series. By the end of "Rising Star" the series really feels resolved. The Shadow War is gone. The corrupt Earth administration has been overthrown. For the first time in the series the galaxy is at peace. Season 5's first task is to tell the audience that there is still story to go, and that makes it feel less like a conclusion and more like a tacked-on one-season sequel.

Babylon 5's narrative structurally operates in a very specific fashion. It works essentially like soap opera: while one episode may tie up a story arc, its subplots will also continue arcs that are still running and introduce entirely new ones. The result is a narrative that is continually developing and climaxing. The series becomes addictive because every episode (in theory) has a satisfying conclusion in tandem with a narrative hook leading to the following week. That sorts of overlaid narrative takes time to develop, since it needs a solid half-season before there are enough balls being juggled to grab the audience's attention. You can see the process happen in Season 1, the first half of which is remarkably weak because there are not enough continuing storylines to support it. By the end of the season that situation has improved and the quality of the series has picked up. From Season 2 it rockets along very successfully.

Since Season 4 wrapped up most ongoing plotlines fairly successfully, it leaves Season 5 back at square one. It has to develop entirely new story arcs, and you can see the effect as the season goes on. The first half, which spends much of its time focused on Byron's weak telepath rebellion on the station, feels remarkably weak and hollow. In the background, however, the seeds are sown for the subsequent Centauri War. Once that enters high gear, the series begins to feel like its old self again.

While that is the biggest problem, it is by no means the only one. There is a weird change in tone for Season 5, in which many characters are suddenly written in more two-dimensional ways or regularly getting side-lined. This affects Sheridan and Delenn a fair bit, and while Londo and G'Kar continue to feature prominently they are more often than not used for comedy instead of drama. The series gains two new prominent characters. Captain Lochley (Tracy Scoggins) is a replacement for Ivanova (Claudia Christian declined to return for the final season) who only appears in half of the episodes. She has potential but it is never realised. Byron (Robin Atkin Downes) is a telepath leader who appears in nine episodes over the season's first half: he is very poorly written and weakly performed, and comes close to derailing the whole season. The Byron story arc really is Babylon 5 at its weakest: too much time spent dwelling on uninteresting characters, and largely told in a fairly tedious and boring fashion.

Season 5 is not the worst season of the series; that remains the immensely shaky Season 1. It is a huge step down from Seasons 3 and 4 though, and is a bit of an anticlimax to the series. A five-year plan for a drama is all well and good, but Babylon 5 lets off its most exciting fireworks in its fourth year and leaves little drama for its fifth to exploit.

Nonetheless there are still some solidly enjoyable episodes to be found. My top five would be (in broadcast order):
Conversely, the season's worst episodes are probably: