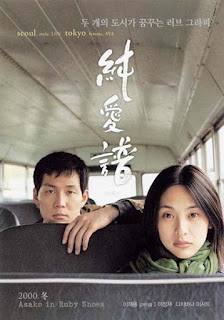 I really don't know quite what to make of Asako in Ruby Shoes. It is a 2000 comedy drama from Korean writer/director E. J-yong. It effectively tells two stories in parallel. One of them follows an endearing and rather funny young woman struggling to find her place in the world. The other follows a pervert and sex pest, the sort of man who hides in the women's toilets in the hope of glimpsing whatever woman he is currently fixated upon. Lee Jung-jae gives a great and rather engaging performance as Korea's worst slacker, but in truth he's almost too ugly a character to like.

Let us assume you can move past - or at least tolerate - the worst of U-In's behaviour. That out of the way, Asako in Ruby Shoes has an awful lot to recommend. I remain unconvinced of the film as a whole, but many of the individual scenes are remarkable. The film kept grabbing my attention with a well-structured image, or a particularly striking performance, or a really funny exchange of dialogue. The Aya/Asako half is undoubtedly the stronger half of the two. Misato Tachibana gives a strong and varied performance, giving Aya multiple levels of emotion from melancholy to anxiety to momentary bursts of happiness. Her life seems particularly grounded and realistic, and her issues and emotional upset feel very believable. She manages to avoid becoming a stereotypical 'manic pixie dreamgirl', which I very much appreciated.

U-In's half is much more frustrating, Part of his misadventures bring plenty of laughs; for example he ignores reminders to fix the water tank above his apartment for so long that his entire building floods. In another part of the film he gets too drunk at a friend's fundraiser dinner and collapse while singing karaoke. On the other hand we have to watch him spy on women, follow them around attempting to awkwardly give them presents, and use computer graphics programs to cut and paste the faces of women he knows onto the bodies of half-naked models. It is actually a pretty believable character, but he is not a nice one, and given the film has romantic comedy partly on its mind that does cause a big problem. I don't think it's a problem that E. J-yong has overcome by the time the film ends. I expected U-In to learn something, or to mature, and I don't think he ultimately does. Realistic? Maybe. Satisfying? Not really. If you present your audience with what is basically a romantic comedy I think you do need to make sure both leads are people you want to see get together.

Much of the film follows the general pattern of Korean melodramas: the slow pace, the over-emphasised and tortured emotion, and particularly the piano-based musical score. It keeps disrupting that pattern with beautiful and slightly unexpected scenes. In the end I found myself disliking U-In yet compulsively watching the film to the very end. There's something very engaging about the odd little moments and situations that crop up, and a curiosity over how Aya and U-In's paths will properly cross for good.
Posted by Grant at 7:43 AM