Bodacious Space Pirates: "We'll Have Juice at the Afterparty" 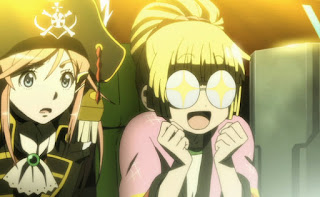 It's 5 May 2012, and time for another episode of Bodacious Space Pirates.

Or, to work on real time, it's been about six weeks since the last Bodacious Space Pirates review, so we're probably a bit overdue. Marika has a new mission: to get former yacht club president Jenny Dolittle to Space University before Jenny's corrupt magnate uncle has her married off for his own political advantage. In her way, the Dolittle fleet commanded by that same uncle, Robert, who isn't going to let his corporate master plan be ruined.

This is a great episode. It blends light-hearted action with some properly crunchy bits of plot, has an energetic pace, and provides a nice balance of action and character. It helps that this is the final episode of the current storyline. With everything already set up during the slightly less interesting earlier episodes, there's nowhere for this episode to be than sprinting towards the finish line.

There's a lot to like in this episode. For one thing it makes excellent use of its split cast. The Bentenmaru crew are still stuck in quarantine, but provide virtual support via laptop computers and use their hacking skills to uncover valuable intelligence on Robert Dolittle. Up in the Bentenmaru itself, the school yacht club continue running the ship, and doing an exceptionally good job of it as well. The dialogue deliberately refers back to earlier episodes with the yacht club's first trip out into space: they've clearly learned and developed a great deal in the intervening months.

The action also varies nicely. In addition to scenes of frantic hacking and strategising, there's a proper space battle with requisite narrow escape, there's a brief piece of personal piracy, with the yacht club storming a political rally to ambush Jenny's supposed fiancée. There's even a great 'gotcha' climax, where Marika and her crew use their brains to win the day rather than their guns. It is all wonderfully paced and structured. There's even time for a nice denouement at the end.

We're now eighteen episodes into Bodacious Space Pirates. By my reckoning thirteen of them have been good. The quality ratio rises once more to 72 per cent.
Posted by Grant at 4:57 PM