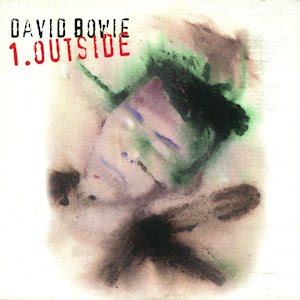 Last night, along with everybody else in the developed world, I heard the news that David Bowie had died. It seemed a tremendous shock, even though he had released a final album four days earlier that pretty much told everyone he was dying of cancer - we had all simply failed to listen to him. It was a typical move for Bowie, to turn his own death into a work of art. He was, and will remain through his work, a remarkable artist. Not just a musician but a multi-media phenomenon: an actor of stage and screen, the writer of a musical, a talented painter, a fashion icon, and so on. I am not certain there was a medium in which he did not at least experiment. He even co-wrote a videogame.

Bowie has had an enormous impact upon me personally. As a small child I was terrified of this creepy man dressed as a clown singing "Ashes to Ashes". When I was growing up in the 1980s he was a permanent fixture of music television through his sometimes-derided period of very commercial pop hits. He starred in Labryinth, one of the three films directed by another of my heroes Jim Henson. It was in 1993 that I was completely taken by Bowie's album Black Tie White Noise. From that point on I became an enormous fan of his work, eagerly awaiting new material while digging back and properly appreciating his earlier works.

I was trying to think of what to write about David Bowie - I knew I wanted to write something to honour his memory, because he's left such an indelible impression on me and influenced me a great deal. Should I write some kind of career overview? A list of my favourite songs? A look at his work as an actor? In the end I decided to keep it focused and personal. Here's a review of my absolute favourite David Bowie album: his 1995 release Outside.

Outside is a concept album developed by David Bowie and Brian Eno. It follows the story Nathan Adler, a detective in 1999 (then four years in the future) investigating the murder of a 14 year-old girl named Baby Grace. In this pre-millennial future, 'art crime' has become prevalent, with criminal kidnapping, murdering and mutilating their victims as a form of artistic expression. The album was intended to be the first of five, one released each year between 1995 and 1999, and collectively forming an expression of pre-millennial tension. There was even early discussions with theatre director Robert Wilson about adapting all five albums into a lengthy and elaborate opera. Ultimately, Outside was the only one of the five to be released. The second instalment of The Nathan Adler Diaries, an album titled Contamination based around a viral pandemic linked to 17th century Indonesian pirates, was recorded but never completed. Bowie and Eno moved on to other projects instead.

The album was almost entirely improvised. Bowie would write lyrics, and then those lyrics were typed into a purpose-built computer program that randomised the order of the lines. Bowie and his band would then improvise songs using those randomised lyrics. To motivate the artists Eno would hand out small cards each morning giving each musician a character to play, with the instruction to play their music in character. (One example: 'You are the disgruntled member of a South African rock band. Play the notes that were suppressed.') Some of these improvised jam sessions lasted for several hours each, with Bowie and Eno then editing and remixing the recordings down to more feasible song lengths. Even with this aggressive editing process, at 75 minutes Outside was David Bowie's longest studio release.

The result is a lengthy and immersive record, one in which the tracks all blend and fade from one to the other, the songs interspersed with strange and surreal monologues performed by Bowie as a variety of characters. Due to the randomised lyrics, it is almost impossible to follow Nathan Adler's story. Then again that's hardly the point. This is a wonderfully odd, richly textured and deliberately chaotic album.

There is a slightly messy, overly-complicated sound to Outside that really appeals to me. You can listen to each track multiple times, teasing out individual layers and instruments. Trent Reznor's Nine Inch Nails seems an obvious influence, and I suspect it wasn't co-incidental that Bowie toured the album in 1996 with Nine Inch Nails playing half of the set. The album also pushes Bowie's music towards 1990s dance music, a trend that peaked with his 1997 follow-up Earthling.

"The Heart's Filthy Lesson" is an early highlight, sounding very dark and rough and mixing up electric guitars and electronia with piano work by Bowie stalwart Mike Garson. A few tracks later we find "Hallo Spaceboy", the album's lead single. For the single release it was completely reworked by the Pet Shop Boys to the point where it feels more like their song than Bowie's. The album version is vastly superior. Occasionally the album gets a little more conventional with songs like "No Control", but altogether it's just wonderfully loud and strange. Overall it's amazing how much it feels like an album. This isn't a collection of singles with some sub-standard tracks to fill up the numbers. It actually works best all as one 70-minute work from beginning to end. To be honest it doesn't feel like pop music. It feels like the soundtrack to some weird theatrical event that never got made. It's so much more performative than your average album.

Then, rather abruptly, we hit "Strangers When We Meet". The song was originally performed for Bowie's 1993 soundtrack to The Buddha of Suburbia, but he revisits it here and gives it some much-needed exposure. It's the most mainstream and cleanly produced song on the album by a country mile, and represents a welcome flashback to the similar songs produced in early decades. It is one of my favourite David Bowie songs ever, perhaps surpassed only by "Heroes". It's a wonderfully upbeat reassuring way to close off the album.

The beauty of David Bowie was that his style kept evolving, and pretty much every single one of his albums is a favourite for somebody somewhere. Outside is easily my favourite among his works, but for others it's going to be someone else. I am going to miss him producing new works tremendously, but I'm going to treasure what he left behind.
Posted by Grant at 6:40 PM