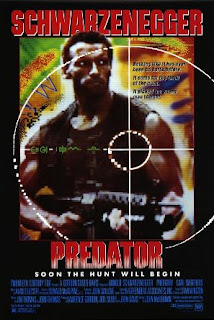 A six-man team of special operatives head into the South American nation of Val Verde to retrieve an official held hostage by an insurgent militia. Once in the jungle the team find themselves stalked by an invisible assailant that is killing them off one by one.

Predator is a 1987 science fiction action film written by Jim and John Thomas and directed by John McTiernan. It was the second feature film for McTiernan, after his 1986 debut Nomads was met with widespread disinterest by American movie critics. Predator, however, knocked McTiernan's career into high gear. He followed it up with Die Hard (1988) and The Hunt for Red October (1990), before seeing his career falter with less popular works including Medicine Man (1992), The Last Action Hero (1993) and the troubled, expensive flop The 13th Warrior (1999, which remains a great but hopelessly compromised film). McTiernan's last film was the 2003 thriller Basic. A few years later he was convicted of lying to an FBI investigation and sent to prison for several years. He has been free since early 2014 but, to date, he has not returned to filmmaking.

This is a deep shame, since films like Die Hard, The Hunt for Red October and particularly Predator show McTiernan off as a significant filmmaking talent. We are all losing out without him working in the industry any more. Well, all of us who were not the subjects of his illegal wire-tapping at any rate.

Predator catches star Arnold Schwarzenegger at the initial peak of his popularity. By this stage of his career he had already starred in two Conan movies and the original Terminator, and had firmly established himself as one of the 1980s' most popular action stars. His 1985 film Commando demonstrated that he could headline his own feature purely based on his own star power, and after a momentary wobble with 1986's Raw Deal, Predator showed him off as one of the biggest stars in Hollywood. It also shows the enormous development he had undertaken as an actor. His early roles were often very awkward, relying on strong directors to tease out engaging performances. By Predator he is much more in control. He has a commanding screen presence and a lot of charisma, and has even taken to inserting his trademark quips and puns into his dialogue. He is also bulked up with muscle to a degree he does not really come close to again. It's clear that Schwarzenegger had performed iconic roles before Predator. I think this is the first of his films to really cement the overall "Arnold as hero" persona that sustained his career for the next decade. Everything before Predator seems prototypical. This then, even more than The Terminator, is the ultimate Schwarzenegger movie.

It is a crazily male movie, featuring a cast almost entirely comprised of muscular, sweaty, gun-toting alpha males. They are all scripted as archetypes, whether it is Shane Black's constantly joking Hawkins or Sonny Landham's stoic, semi-mystical Billy. The mission on which they are sent - to retrieve hostages from a jungle-dwelling militia - is just as generic, although given the film's 1987 release it does seem somewhat topical. Major Dutch Schaefer (Schwarzenegger) and his team infiltrate the jungle, find the rebel camp, and shoot pretty much everyone they find there save for a single female survivor (Mexican film star Elpidia Carrillo). It is deliberately generic, however, and serves purely to get the team into the jungle and quickly establish their characters.

The film's second half is much more interesting, as Dutch's team is murdered one by one by an invisible, technologically superior alien hunter. It jumps from tree to tree, watching the soldiers from behind a heat-vision mask and killing them with a variety of weapons both high-tech and low. As they are picked off, these previously infallible soldiers begin to crack and panic and read in unpredictable and self-destructive waves. To an extent the film begins to deconstruct its own machismo. The gung-ho masculinity of earlier scenes gets broken away one killing after another. By the film's climax it is just Schaefer on his own, fighting toe-to-toe with a seven foot-tall alien hunter.

The Predator itself is a stunning work of prosthetic make-up and animatronics. It is reptilian, with a weirdly scorpion-like face boasting mandibles and dreadlock-like tentacles. A monster film of this type - and Alien for that matter - rises and falls on the back of its monster. In this regard Predator succeeds wonderfully. The Predator is effective, original and visually iconic. It was designed by Stan Winston as a replacement when an earlier dog-like designed failed to meet with the production team's satisfaction. The filmmakers are lucky to have had the second chance: I have no doubt that, without its famous design, the Predator would never have managed to appear in five films to date.

While the storyline of Predator is very simple and generic, that actually works to the film's benefit. The focus of the work is not on what happens, but how. Cinematographer Donald McAlpine does a phenomenal job of shooting the jungle setting, and the action sequences. The film is well paced with a slow burn that soon gives way to a panicky hunt and a brilliantly edited climax. It exploits the best of Schwarzenegger's talents, and the Predator itself is wonderfully realised on-screen. By telling a simple story in an incredibly effective and energetic manner, Predator manages to become one of the very best action films of its decade.

Of course back in 1987 there was no relationship between Predator and Alien whatsoever. That came later, in the 1990 sequel, where a production in-joke inadvertently launched one of the biggest on-screen rivalries of all time.