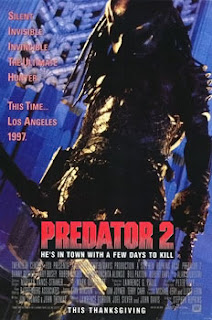 During a 1997 heatwave, the Los Angeles police department struggles to prevent a gang street war between Colombian and Jamaican drug kingpins. Lt Mike Harrigan (Danny Glover) and his team uncover a third party working its way through both gangs, using seemingly super-human powers to sneak into their hideouts unseen and ritually murder them all. It is a Predator (Kevin Peter Hall); a seven-foot tall reptilian alien that has come to Los Angeles to hunt and kill human beings.

Three years after the original Predator came Predator 2, a sequel boasting a different setting, director and cast. It retained writers Jim and John Thomas, as well as composer Alan Silvestri and Predator performer Kevin Peter Hall. Outside of those four men, it was pretty much an entirely new enterprise.

Predator 2 under-performed in cinemas compared to the original, and it was met with generally negative reviews. Watching this film immediately after the first one makes it fairly clear why this is the case. Predator was a relatively simple, dull story told in a very energetic and engaging manner. Predator 2 has a much more interesting story, but it is not told in anywhere near as effective or dramatic a fashion.

Predator 2 does make solid use of a different setting, with the Thomas' script relocating the action from a South American jungle to the 'urban jungle' of 1997 Los Angeles. It is a clever setting for a Predator film, with trees replaced by buildings and the commandos and rebels all replaced by drug dealers, criminals and police officers. It is all developed in a more complex fashion as well. The original film simply pitted Schaefer's team against the Predator. The sequel pits the Predator against Lt Harrigan as well as a special government team led by Special Agent Peter Keyes (Gary Busey), and two separate drug cartels. It gives the film a more varied range of scenes to present, and directions in which to push the narrative.

The near future setting pretty much exists to allow a light amount of satire to develop. This is not a realistic depiction of Los Angeles, but rather a sweaty, lawless hellhole of violent street battles and armoured police officers. It does not push itself too far away from the real world; for example it never gets anywhere close to the likes of Verhoeven's Robocop, but it does add a nice little wrinkle to the set-up. It's particularly effective in one of the film's standout sequences: a man is getting mugged on a subway train, and every single passenger turns out to have a handgun with which to defend themselves - for what good it does when the Predator arrives on the train and starts killing them all.

The Los Angeles setting also enables the film to introduce a fairly solid mixture of African American and Hispanic culture, including the casting Danny Glover as Harrigan and Maria Conchita Alonso and Ruben Blades as two of the three members of his team. The third, Detective Jerry Lambert (Bill Paxton) is specifically defined by his awkward, overly enthusiastic whiteness. Sadly the cultural representation within the film stumbles badly when it comes to the two rival drug cartels, both of which are drawn as caricature. The Jamaican Voodoo Posse in particular, and its wide-eyed, bone-reading kingpin "Big Willie", feels particularly egregious.

To its credit the film does not waste time in introducing the Predator. The film is a sequel, and rightfully assumes its audience already knows the Predator's appearance and agenda. It's a visibly different character here as well, with Kevin Peter Hall giving it a specific body language and bearing that differs from his performance in the first film.

The concept of a special government team hunting down the Predators as they arrive on Earth is a clever one, and it gives the film a much needed boost towards the third act. Gary Busey does a reasonably solid job as the insincere Keyes, but there is an element of dissatisfaction in knowing that he is playing a role originally written for Arnold Schwarzenegger. An alternate version of this film, in which Glover's police lieutenant stumbles upon an operation by Schwarzenegger's Schaefer, would have been so much stronger and more satisfying. Blame 20th Century Fox for refusing to shift the production schedule to accommodate Terminator 2.

The film's climax, in which Harrigan chases the Predator across the rooftops and into its hidden spacecraft beneath the city, is a very mixed bag. Some moments are well presented and thrilling. Others fall a little flat. A few, like Harrigan going toe-to-toe in a human versus Predator fistfight, beggar belief. It does all end well, however, and to this day leaves me desperate for Fox to produce a prequel explaining the flintlock pistol which Harrigan receives.

Altogether that seems pretty solid and entertaining. The problem with Predator 2 is in the smaller details. The dialogue is, for the most part, pretty risible. While the action is broadly very well shot, on a beat-by-beat level it often does not seem very convincing. The Predator is magically immune to bullets at point-blank range until it is narratively necessary for it to be injured. More than a few of the supporting actors simply are not very good at their jobs. In the end it all feels like a bit of a squandered opportunity: a great basis for a sequel, and the potential to be even better than the original, but let down by a weak script and a constant stumble of small but cumulative missteps.

Director Stephen Hopkins went on to better things - The Ghost and the Darkness for one, and his exeptional pilot for 24. Predator would have to wait another fourteen years, until 20th Century Fox decided to pair them up against their studio cousins in Alien vs Predator.