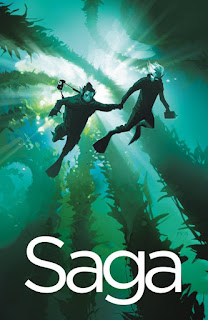 Saga is back this week, continuing its whirlwind tour of the galaxy and showing what the growing cast of this ongoing comic book epic have been up to in the two years the series jumped forward at issue #31. This time around it is the unexpected return of harried journalists - and lovers - Upsher and Doff, as they get back onto the trail of the rumoured baby born of two enemy civilizations.

This sixth arc for Saga is jumping all over the place, which is nicely unexpected on the one hand, but lacking in momentum on the other. It's an approach that works really well if an issue focuses on really interesting characters, but not quite so well when the protagonist becomes someone a little ordinary or underwhelming. Personally I put Upsher and Doff in that category. They're simply not engaging enough compared to the other people the book could be following right now.

All of the standard features of Saga are there: the well-crafted and funny dialogue, the unexpected reveals and twists, and the gradually tiresome attempts to shock the readership with sex and random depictions of genitalia. Fiona Staples continues to produce distinctive and bright artwork. This isn't the best issue of Saga but it remains pretty enjoyable. I just hope things start to pull together in the next issue or two. (3/5)

Under the cut: reviews of Batman and Robin Eternal, Jem and the Holograms and Victorie City.

Dick Grayson tries to use the resources of Spyral to interrogate the Orphan. In a flashback Batman finally makes good on his promise to Mother to murder two innocent civilians - or does he? I think we are knew the answer to this one back when this scene was teased in Eternal's very first issue. This issue moves the story along a bit more, fills in some gaps in the back story, and doesn't embarrass itself. Sadly that's about the extent of its achievements. The overall story may be engaging, but the individual issues are beginning to get a little ordinary. (2/5)

Jem and the Holograms #11

A new story arc kicks off here, for anybody looking for a good time to jump in. With Pizzazz out of action the Misfits need a new lead singer for their tour, otherwise they will find themselves in breach of contract. Meanwhile the Holograms throw a fresh party, only to discover Jerrica has undergone some unexpected changes. This remains a sweet blend of teen melodrama and pop music, with engaging art by Sophie Campbell and bright colours by M. Victoria Robado. It's so much better than a tie-in to a 1980s TV cartoon has any right to be. There should be more comics like this out on the market, appealing beyond the standard 30something male superhero enthusiast. (3/5)

From writer Keith Carmack and artist Vincent Nappi comes an all-new hard-boiled crime comic - the problem is that it's all just a little too hard-boiled. There have been so may dark, grimy stories about the one noble detective in the police force, and a crazed serial killer stalking the streets at night that any new attempt in that territory really needs to find a fresh angle or be particularly well written and illustrated. Victorie City simply does not manage to bring the goods. Nappi's artwork has potential but is a little too scratchy and messy to scan easily. Carmack really needs to go back to the drawing board: there are a lot of comics published every week, and a story this generic simply won't get noticed. (1/5)
Posted by Grant at 7:13 AM