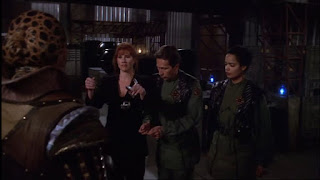 It's 11 November 1998, and time for the antepenultimate episode of Babylon 5.

Former Mars resistance leader Number One (Marjorie Monaghan) arrives on Babylon 5 with a warning for Garibaldi (Jerry Doyle): someone has paid an assassin to kill him. Meanwhile G'Kar (Andreas Katsulas) prepares to leave the station forever, and hopes to take Lyta (Patricia Tallman) with him.

So here we are: three episodes left to Babylon 5, and time for things to begin winding down and wrapping up. It feels appropriate, given how much of the series has broadly cribbed from Tolkien's The Lord of the Rings, that Babylon 5 also takes its sweet time in farewelling each character in turn. We have already farewelled Londo Mollari (Peter Jurasik) with the end of the Centauri War. In "Objects in Motion" we say goodbye to Garibaldi, Franklin (Richard Biggs), G'Kar and Lyta. Generally speaking, it's an effective and emotional goodbye for all four of them.

Number One, who finally gains the real name of Tessa Holloran, arrives to warn Garibaldi and his fiancee Lise Hampton (Denise Gentile) that persons unknown have hired a professional killer to murder both of them. In the aftermath of the Earth civil war, many illegal links between the former Earth government and martian corporations are being uncovered, and some parties fear either Lise -as the inheritor of Edgars Industires, or Garibaldi will discover something better left hidden. It's a neat little twist that it winds up being the entire board of Edgars who have ordered their deaths, hoping to keep their own covert deals a secret. It's nice to see Garibaldi do something other than dwell on being an alcoholic for a change. He has had a rough, wasteful season, and it's nice to see him at least get a decent exit at the end of it. And so he goes, with a new company to run and a new wife to live with on Mars.

The return of Number One affords her a brief but beautifully performed reunion with Franklin, giving the audience just enough for us to assume they will become romantically involved before they too exit stage right: him for a new job at Earthdome, and her as Garibaldi's replacement as the Earth Alliance's head of intelligence.

Finally there is G'Kar's decision to leave the station to travel the universe with Lyta. He cannot stay on the station, as the scores of religious devotees following him around is making his life untenable. He cannot return home, as pressure on his homeworld are demanding he either lead his people himself or anoint a leader for them. He wishes to do neither, and so finally unshackles himself from the needs of his people to do something for himself instead. It is outstanding to see just how far his character has progressed and grown since the original TV movie. The bombast and aggression are gone. The hate has dissipated. Now he is at peace, and keen to explore and experience the universe around him. When Lyta agrees to go with him, it feels natural and more importantly it feels right. She remains a fairly dark character, and still somewhat threatening to her former workmates and friends, but she walks off the station with a silver lining to her future. It feels as if she will find her way again on the road. I hope she does: I did not like Lyta at first, but she - and Patricia Tallman's performance of her - has grown on me a great deal.

These two exits are nicely tied together at a public farewell ceremony. Zack (Jeff Conaway) has cleverly worked out how to track down and apprehend Edgars Industries' assassin, and so when the time comes he is easily over-powered and arrested. It's then that the episode springs a great twist: a second killer, this one a disappointed Narn zealot whom G'Kar rejected earlier in the hour. It comes out of nowhere, and provides an excellent climax.

The episode ends with Franklin about to leave, Garibaldi and Lise climbing onto a starliner, and G'Kar and Lyta gone and exploring the universe. Sheridan (Bruce Boxleitner) and Delenn (Mira Furlan) are preparing to leave as well, for the new Interstellar Alliance headquarters on Minbar. Delenn suggests taking a walk along the entire length of the station before they leave - something neither of them have done before. It's a twee suggestion, but I can't lie and pretend it doesn't work. This is a great episode, and it ends in a great, bittersweet sort of place. The second of four goodbyes has been made: only two to go.

We're 20 episodes into the season, and 11 episodes have been good. The quality ratio rises to 55 per cent.
Posted by Grant at 7:35 AM