Star Trek: The Next Generation: "The Mind's Eye" 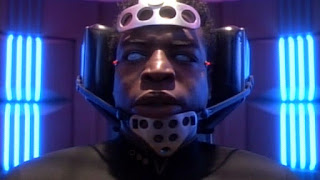 The Enterprise heads to the Federation-Klingon border, where a local governor claims the Federation is interfering in a Klingon colony uprising. Lieutenant La Forge (LeVar Burton) heads to an artificial intelligence conference on Risa - only to be kidnapped en route by the Romulans.

With "The Mind's Eye" The Next Generation does a Manchurian Candidate pastiche, with La Forge standing in as Raymond Shaw. The episode also picks up what has been a story arc quietly weaved through two seasons now: a long-running Romulan plot to destabilise relations between the United Federation of Planet and the Klingon Empire. A story about a brainwashed assassin, however closely inspired on somebody else's movie, is a good fit for the story arc The Next Generation is telling.

This is a great example where an episode of The Next Generation squeezes in its regulation A and B-plots, but actually manages to inter-relate them properly so that one doesn't function properly without the other. On the one hand there is the mystery of a Klingon colony rebelling against the Empire using Federation phasers, and on the other there's the mystery of why Geordi was kidnapped by Romulans and what they are planning to make him do. When it all ties together at the climax - the Romulans supplied the weapons, and aim for Geordi to assassinate the colony's governor - it is a tremendously satisfying moment.

It is also great to see LeVar Burton get a properly decent episode with which to work, and one that doesn't rely on him being awkwardly incompetent and creepy at romance. Geordi really gets put through the wringer here, and to the credit of writers Ken Schafer and Rene Echevarria the damage done is not easily resolved by the episode's end. There are multiple layers and emotions for Burton to pay as well, since we see him as himself as well as under Romulan control.

The episode is excellently plotted and edited, since it pushes its way through a fairly large amount of plot for a standard Star Trek episode. It even manages a decent third-act twist that a lesser episode would not have bothered to include - it takes the episode up a notch and makes it much more satisfying in the end. Even more entertaining is how, in a wonderfully Philip K. Dick manner, La Forge is placed in charge of investigating a potential saboteur and counter-agent working on the Enterprise, without consciously knowing that he is investigating himself.

First-time director David Livingston does a great job of filming the episode as well, including a couple of subtle and not-so-subtle nods to the source material. Livingston, who was originally a production unit manager for The Next Generation, sticks around in the franchise. After "The Mind's Eye" he directs another 61 episodes of Deep Space Nine, Voyager and Enterprise. The lionfish in Captain Picard's ready room is named after him.

This is a strong thriller, bringing the number of decent Season 4 episodes up to 18 out of 24. The quality ratio rises to 75 per cent. Keen-eared viewers may also recognise the voice of the Romulan commander overseeing Geordi's brainwashing from the shadows. Her identity will be revealed in two episode's time, in the season finale "Redemption".
Posted by Grant at 10:28 AM