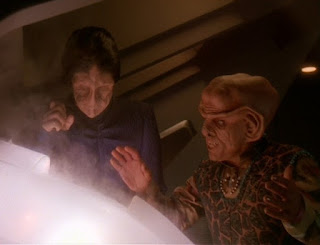 It's 6 November 1995, and time for another episode of Star Trek: Deep Space Nine.

The Defiant has entered the Gamma Quadrant to allow for trade negotiations between the Karemma Commerce Guild and the Federation - negotiations made difficult by all of the fraudulent fees charged by the Ferengi as intermediaries. When the negotiations are ambushed by two Jem'Hadar starships, the Defiant soon finds itself badly damaged and sinking into the atmosphere of a gas giant - and the Jem'Hadar remain hot on its tail.

"Starship Down" is basically a fusion of two well-worn genre tropes, brushed down, thrown together and re-purposed as a science fiction adventure. The first trope is the submarine movie, with the Defiant forced to play a tense game of cat and mouse as it tries blindly to locate and destroy two enemy vessels. The second is the disaster movie, with the regular cast split up into isolated groups when the ship is damaged. Each pairing of characters is then forced to improvise in order to survive the day and get back to safety. In the end those two blended storylines help to make "Starship Down" a generally entertaining but also rather generic experience.

It is a nice piece of series continuity to feature the Karemma. They first appeared in "Rules of Acquisition", as the Ferengi attempted to open trade in the Gamma Quadrant. They returned briefly in "The Search", as an intermediary through which Sisko (Avery Brooks) hoped to contact the Dominion's Founders. Seeing them once again adds a nice sense of familiarity to the episode. It could potentially have been any random alien race with whom the Federation needed to negotiate. Instead it is someone that the audience already knows, albeit to a fairly limited extent. James Cromwell is great as the Karemma representative Hanok. It takes a certain skill to perform a character from underneath several pounds of latex rubber, and he does a marvellous job with it. His terse negotiations with Quark (Armin Shimerman), and their subsequent attempt to defuse an unexploded Jem'Hadar torpedo, form some of the best scenes of the episode. They are funny, smartly written, and do a particularly good job of explaining the Ferengi mind-set.

Meanwhile O'Brien (Colm Meaney), Worf (Michael Dorn) and a pair of engineers are in Engineering, desperately working to track down the Jem'Hadar fighters and to save the ship. It's a good enough series of scenes, aimed mainly at forcing Worf to learn to be more considerate around his crewmates. It does add to a growing tendency, however, to make the Worf of Deep Space Nine a less flexible or likeable character. I loved him in The Next Generation. His Deep Space Nine persona is much more terse and grumpy.

Bashir (Alexander Siddig) and Dax (Terry Farrell) are essentially trapped inside a cupboard for the episode. There's a half-hearted attempt by the writers to revive the potential of a Bashir/Dax romance, but it already seems a bit dead in the water now that Worf has arrived. It seems a shame, since a slow-developing romance between Bashir and Dax would have been quite welcome - particularly given the extensive maturation Bashir has undergone since the series debuted.

On the severely damaged Defiant bridge, Kira (Nina Visitor) does her best to keep Sisko awake; he has suffered a severe concussion with bleeding to his brain. It is probably the most interesting conversation of the episode, since she finally admits how difficult it is for her to be close to Sisko. He is a major figure in her religion, and working directly beneath him is essentially like being deputised by Moses. I always like it when Deep Space Nine explores the Bajoran faith, because it's so rare for science fiction television to properly explore such issues.

These four storylines get threaded together in a fairly rudimentary fashion. As I mentioned earlier in the review, this is an enjoyable episode but it's also a pretty generic one. It doesn't do anything particularly new, but what it does it achieved sufficiently to be worth watching. In the end it's fun, but it's a very average kind of fun. Six episodes into Season 4, and five have been good or better. The quality ratio bounces up to 83 per cent.
Posted by Grant at 7:32 AM