Star Trek: Deep Space Nine: "The Way of the Warrior" 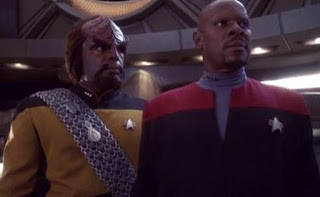 Deep Space Nine never found the audience enjoyed by The Next Generation. When it began in 1993 it was essentially the secondary series, always overshadowed by its elder sister. Pretty much as soon as The Next Generation characters graduated to feature films, Paramount replaced them with Voyager as the flagship drama of their own TV network UPN. Voyager got all of the attention The Next Generation had, and to a large extent Deep Space Nine continued to run in the shadows. Paramount wanted the DS9 production team to do something with their fourth season to really grab viewers' attention and make a big impact on the ratings. Their strategy was this: turning Klingons back into the enemy of the Federation and bringing in popular Next Generation character Worf as a regular cast member. With a high-budget 90-minute season premiere, he makes a hell of an entrance.

It is entirely unintentional that I am reviewing this episode immediately after reviewing "Redemption", the Next Generation Season 4 cliffhanger in which Worf was forced to choose between his heritage as a Klingon and his duty as a Starfleet officer. This episode, produced four years later, sees Worf offered to same choice again  by Chancellor Gowron (Robert O'Reilly). This time around he's quicker to say no and stay with his Federation comrades. He does this knowing that he will be exiled from his own people once again - only this time he chooses honour over loyalty not because it will protect the Empire but simply because it is the right thing to do. Despite coming to Deep Space Nine in an emotional funk and debating leaving Starfleet altogether, it's a much more mature and thoughful Worf who is on display here than the one I just finished watching in "Redemption".

How well Worf integrates into the series full-time is a question for a subsequent episode. As far as his first appearance goes, he works brilliantly. The script cleverly gives him encounters with pretty much the entire regular cast, one by one, and it wastes no time in giving him a slightly antagonistic relationship with Odo (Rene Auberjonois) and a romantic prospect with Dax (Terry Farrell). He works particularly well with Captain Sisko. There's a really strong connection between the two, likely the result of Brooks and Dorn simply working really well together.

Brooks is firing on all cylinders in this episode. Since Season 3 Sisko has shaved his head and kept the goatee, and it gives the character and much harder, more aggressive look. It matches the progressively darker tone of the series very well. There have been a few more small changes between series. Both Dax and Dr Bashir have gone up in rank, while Siddig el Fadil has had a change in performing name to Alexander Siddig.

What's particularly impressive with all of the character work in this episode is how it's been so ably squeezed in between a fairly large amount of plot. This is Star Trek on a much larger scale than we usually see on television: multiple space battles, a violent battle along the Promenade, and a broad host of guest characters mixed in with the regulars. In addition to Gowron returning for his second appearance in the series, we see both Garak (Andrew Robinson) and Dukat (Marc Alaimo) return, and also see the debut of Klingon General Martok (J.D. Hertzler), who will become a regular supporting character as the series moves on from here.

Wedged into the middle of the second half is an unusual scene between Quark (Armin Shimerman) and Garak. Quark gets Garak to try root beer. Garak hates it. Quark hates it too, but then notes how its cloying sweetness can slowly become addictive. They then compare it to the Federation: irritating to live under, and cloyingly sweet, but for both of them it has become somewhat addictive. The scene was only written because the second half was running a few minutes short, yet it manages to become one of the most entertaining and perceptive conversations about the Federation and Starfleet that Star Trek has ever had.

This episode actually feels like the Star Trek universe is shifting. Fear of Dominion plots has everybody running paranoid. The DS9 crew run repeated drills. Martok refuses to meet with Sisko and Kira (Nana Visitor) unless they draw blood The Thing-style to prove they're not changelings. The Klingons invade Cardassia entirely out of the paranoid fear that it was the Dominion that provoked the civilian uprising. By the episode's end the Klingons and the Federation have broken a decades-old peace treaty, Cardassia has a new government, Worf is a permanent member of the cast, and everybody is still paranoid that a Dominion invasion could be just around the corner. It feels as if something seismic just happened in the series. Paramount asked for Deep Space Nine to grab its viewers' attention. I certainly think they achieved that effect.
Posted by Grant at 6:44 PM