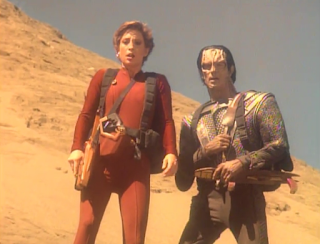 Major Kira (Nana Visitor) sets out to find a long-lost Cardassian prison transport that carried a cargo of Bajoran political prisoners - only Gul Dukat (Marc Alaimo) insists on coming along for the ride. On the station, Sisko (Avery Brooks) mishandles the news that his girlfriend Kasidy (Penny Johnson Jerald) will be living on the station full-time.

"Indiscretion" hinges on the fairly improbable and somewhat unpleasant notion of Kira and Dukat teaming up for an adventure together. He used to be a tyrannical despot, ruling over work camps on an occupied Bajor, and personally responsible for countless Bajoran deaths during the brutal Cardassian occupation. She used to be a work camp prisoner and a freedom fighter, devoting her life to overthrowing the Cardassian regime. Putting them together is sort of like asking a Jew and a Nazi to team up some time after the Second World War. Deep Space Nine never goes quite that far in making the comparison, but it's openly there for the viewer to pick up. To an extent it hamstrings the episode from the get-go - I do not believe Kira would willingly cooperate with a war criminal against her own people quite so readily.

So despite this huge hurdle in logic, why does "Indiscretion" work so well? A lot of it comes down to Marc Alaimo's performance as Dukat. He is a monster - we the viewers should never forget that - but he is also strangely charismatic and superficially likeable. Alaimo is clearly playing the part as if he is the star of his own show, and it's an approach that really works. Nobody really think they're a villain, and Dukat is clearly a hero inside his own mind. There's a confidence and a bravado that makes him an enormously appealing character to watch. There is also a murderous insincerity, and occasionally even moments of honest-to-god humanity. The character gets a lot more emotional range to play in this episode, which sees him confirm a Bajoran lover from the occupation has died, but that his teenage illegitimate daughter is still alive.

It soon becomes clear that Dukat intends to murder his daughter rather than have her suffer the shame of being a half-Bajoran half-Cardassian outcast, and it is clear that he personally thinks this is an honourable and loving thing to do. Kira of course won't have a bar of it, and thankfully he changes his mind at the last minute. These events will be revisited in future episodes down the line. Dukat's daughter Ziyal will become more significant in the future, but for this episode she is briefly seen and more of a McGuffin than a character.

Retrieving Ziyal means rescuing her and the Bajoran prisoners from a Breen mining camp. The Breen, who walk around in cyborg suits suspiciously reminiscent of Princess Leia's disguise in Return of the Jedi, have been mentioned for years in Star Trek: The Next Generation but this marks their first on-screen appearance.

It is interesting that by the episode's conclusion Dukat clearly seems to think he has made some sort of emotional connection with Kira. He's even trying to flirt with her a little. She, thankfully and understandably, doesn't seem to share the sentiment.

The other half of the episode is essentially domestic comedy. Kasidy tells Sisko that she's accepting a job with the Bajoran government, and he is not quick enough to mask his sudden commitment panic. It's a fairly slight storyline, but it's well played and quite funny. Cirroc Lofton proves to be a small highlight as Jake, schooling his own father on how to talk to women. While superficial, it is nice to see the characters develop further, and Sisko moving on from the death of his wife prior to the series beginning.

This is not a perfect episode, but it is a perfectly enjoyable one. Season 4's perfect quality ratio is preserved for now.
Posted by Grant at 6:56 PM