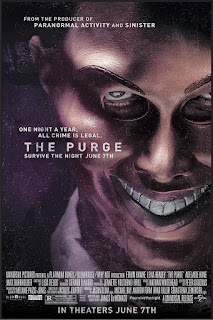 In a future America, one night of the year is handed over to the Purge: a ritualised spree where all crime including murder is no longer illegal, and where citizens can act out their most violent fantasies with legal impunity. On one Purge night, a wealthy security sales manager (Ethan Hawke) and his family bunker down inside their house only to have their lives threatened with the Purge comes for them.

Blumhouse Productions has spent the last few years churning out cheaply made, commercially savvy horror movies and violent thrillers, beginning with Paranormal Activity in 2006 and working its way through 40 films since. The Purge, released in 2013, only cost three million dollars to make but grossed almost ninety million in the cinemas. It has since been followed by two sequels, the second of which is set for release this July. It's a canny method of making commercial cinema, that seems to rely on having a strong hook with which to reel audiences into movie theatres. On the face of it the hook for The Purge seems a little ridiculous and difficult to believe. Once seen on screen, however, the satirical nature of the concept becomes much clearer.

Ethan Hawke plays James Sandin, a sales executive for an expensive brand of home security system. He comes home just before the commencement of Purge Night: from 6.00pm all emergency services across America are suspended, and all crime becomes legal for a period of 12 hours. Want to rampage and loot your way through the city? Go ahead. Feel like murdering your family? No problem. Once it hits 6.00am, all crimes become illegal again and everybody calmly goes about sweeping up the damage to property and people. Sandin's business is understandably booming, and his large upscale mansion is the envy of his similarly rich neighbours.

Of course only the rich can afford such security measures. For America's poor - and particularly its homeless - the Purge is a terrifying ordeal as innocent men and women run for their lives from gangs of rich dilettantes armed with automatic weapons, machetes and baseball bats. James' son Charlie (Max Burkholder) sees one such homeless man (Edwin Hodge) running for his life and opens the security system to let him in. This enrages the gang of rich youths who were hunting the vagrant down, and their leader (Rhys Wakefield) offers James a choice: throw the homeless man out to be murdered, or have his home invaded and he and his family murdered as well. When it turns out the security systems James sells are not as secure as he had led his customers to believe, the stage is set for a short, fast home invasion thriller.

For the most part the film's action is pretty generic. The gang outside manage to cut the power to James' house, which means a lot of sneaking around a darkened mansion playing cat and mouse with a runaway homeless man. Once the gang breaks in, the film takes it up a notch with a lot of gun-fighting and brutal hand-to-hand combat with various improvised weapons. It is not done too poorly, but neither does it show its audience anything that they have not seen many times before. It is capable but generic.

Where the film excels is in the deeper issues and allusions that it makes. It turns out that the Purge, more than anything else, enables the rich to destroy the poor. There is a strong undercurrent of class warfare going on. It is also pretty easy to draw a comparison between the Purge and contemporary America's very real problem with gun violence. The idea that the government would dedicate a day to free-for-all crime sprees is hard to believe. The idea that, given the freedom to murder their fellow Americans, the people of the USA would go on violent kill sprees, doesn't actually seem quite as far-fetched. Is this all enough to make up for a fairly by-the-numbers story and characters? Probably not, but it does lift The Purge up by comparison to a lot of other violent horror thrillers of recent years.

One thing that does stick in my mind after the fact is just how much more extreme writer/director James DeMonaco could have taken this concept. As it stands, the extent of the Purge appears to be violent beatings, stabbings and shootings. It does not take too much imagination to consider far more awful, bleak and horrifying activities that he could have included. It is a pulp premise at the film's heart, and it is perhaps a shame that DeMonaco does not push the premise to the fullest extent for a genuinely effective and confronting horror movie.
Posted by Grant at 6:31 PM