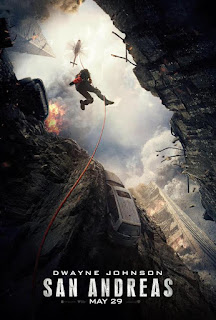 On the day when his skills are needed the most, a Los Angeles fire and rescue worker (Dwayne Johnson) engages in gross dereliction of duty and commits multiple vehicular thefts in order to rescue his daughter at the expense of countless innocent lives.

It would be dishonest to claim in any way that San Andreas, a 2015 disaster film directed by Brad Peyton, is a good movie. On the other hand it would also be dishonest were I to claim I did not have any fun watching it. The truth is that San Andreas is a marvellous confection of visual effects-based eye candy and genre stereotypes, packed with plenty of explosions and collapsing buildings but also so poorly written and thought-out it will make your hair stand on end.

Let us be honest, however: nobody watches a film like San Andreas for its screenplay or its acting. These disaster films - Volcano, 2012, The Day After Tomorrow, Independence Day, whatever - are all in effect the same movie. A group of characters in separate places all try to survive when some sort of natural disaster hits. Some of them live. Many of them die, often in ridiculous situations that provoke derisive laughter more than empathy. Occasionally one of these films will rise above the pack: personally I am quite a big fan of Michael Bay's Armageddon. Occasionally one of these films will try to take its storyline seriously, often with weirdly leaden and self-important results: see Mimi Leder's Deep Impact. For the most part they're just loudly abrasive, almost deliberately bad fun.

So here's the set-up for San Andreas: the San Andreas fault line finally ruptures, rocking California in a south-to-north direction with a successive number of massive earthquakes measuring in excess of 9.0 on the Richter scale. In the midst of the chaos, LA fire and rescue officer Ray Gaines (Dwayne Johnson) abandons his post in a helicopter to rescue first his ex-wife (Carla Gugino) and then his teenage daughter (Alexandra Daddario) from amidst the mass carnage. Meanwhile Caltech scientist Lawrence Hayes (Paul Giamatti) races to warn the public that a bigger, even more devastating quake is fast approaching.

So buildings collapse, the Earth splits open, the Hoover Dam disintegrates and the mother of all tsunamis smashes into the San Francisco bay area. An endless number of people die, either falling from skyscrapers or crushed under debris or swept away by the water. The science of the film is ridiculous, not because Hollywood studios are incapable of accuracy but because they simply do not care. Take the climactic tsunami: real tsunami are massive, visually ugly monstrosities: basically a 40 foot-tall wall of water and debris. They're black. They don't crest like waves. People generally don't die from drowning in a real tsunami. They die from taking a moving car to the face. None of this makes for a visually appealing action beat, so in every case Hollywood will go for the fake, glamorous alternative: in this case a beautifully composed cresting mega-wave, and glittering blue water sloshing majestically into the burning towers of down-town San Francisco. If you treated films like this seriously you would go mad. Accuracy is not their intended purpose.

Dwayne Johnson makes for a predictably charismatic star, since being charismatic in the middle of a dreadfully written action movie is pretty much his raison d'etre. He's been doing it since The Scorpion King, and I suspect he will do it until his aging body finally gives out and he gets consigned to headlining cheaply-produced direct-to-video knock-offs alongside Jean-Claude Van Damme and Steven Seagal. He plays an oddly unlikeable character here though. If you don't let your brain rise above the material you probably wouldn't notice, but he is an oddly awful human being. The film's opening scenes position him as an immensely capable, near super-human rescue worker. When the first earthquake strikes in Nevada he's immediately in a helicopter to begin rescuing the victims. When the second earthquake strikes Los Angeles he turns his helicopter around, abandoning his job, his duty and decades of professional experience to rescue his own ex-wife precisely at the time when his skills are needed the most. Ray Gaines is a selfish, damn-near sociopathic asshole whose total rescue work in the film - asides from his family - is to punch a looter in the face, steal a helicopter, a car, a light plane and a speedboat, and occasionally usher pedestrians to cover.

What makes this behaviour particularly hilarious is that Iaon Gruffudd plays Daniel Riddick, a multi-billionaire property developer now dating Gaines' ex-wife Emma (Carla Gugino). When the Los Angeles quake hits he is in a limousine with Gaine's daughter Blake (Alexandra Daddario). The driver is killed, the car crashes and Blake's legs get pinned underneath a seat. He leaves her to get help, tries to warn a security guard, freaks out among the falling debris and runs for his life. He later straight-out throws a guy to his death in order to save his own life and dies getting crushed by a shipping container on the Golden Gate Bridge. The film actively positions Riddick as a loathsome villain of the film, despite his only killing one person and abandoning another after he fails to free her. Gaines, on the other hand, is treated as an appealing hero despite probably killing at least a hundred people through selfishness and inaction. When you strip that away, it becomes clear that Riddick is rendered villainous by virtue of being childless and rich, while Gaines is positioned as heroic by being working class and having a daughter. There really is an entirely separate - and entirely unintentional - second film to enjoy simultaneously with the first, where you ignore the silly running and screaming and just marvel at how morally bankrupt Hollywood's moral values actually are.

Paul Giamatti plays the role of the noble scientist, drip-feeding the audience information on what is about to happen to California and making lots of awe-struck comments in close-up. He is Ken Watanabe in Godzilla, or Jeff Goldblum in Independence Day. He has a dull narrative purpose, and he exists for no reason beyond sloppily expressed exposition. In Giamatti's case it's even more egregious than normal, since asides from an early location shoot at the Hoover Dam he never leaves the one Caltech laboratory set. I suspect he was paid a lot of money for a one-week shoot, in fact I actively hope he was. Dwayne Johnson is in his element in this kind of dreck. Giamatti is worth ten times this sort of screenplay.

The rest of the supporting cast are reasonably good. Alexandra Daddario is gutsy and appealing, and successfully overcomes a camera that seems intent on dwelling on her cleavage. Carla Gugino avoids falling completely into position as wife-as-victim. Australian actor Hugh Johnstone-Burt struggles valiantly with a bad English accent as Daddario's love interest. Even Art Parkinson manages to be more endearing than irritating as Johnstone-Burt's eager little brother.

Things explode. They crash and burn. They get swept away by expensive visual effects. Random bystanders die. Dwayne Johnson saves his family. It is as noisy as it is stupid. If you watch San Andreas and find it an entirely joyless experience, you need to be sat down and asked: why did you watch this movie? What did you expect? What did you want?
Posted by Grant at 6:13 PM