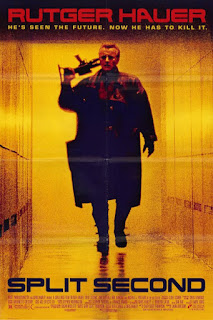 Harley Stone (Rutger Hauer) is a burnt-out, obsessive police officer in the flooded London of 2008. He remains fixated on the death of his partner several years earlier - a death linked to a series of unsolved ritual murders across the city. With a new partner, the Scottish rookie Dick Durkin (Neil Duncan), Stone races to stop the killer before he can kill again.

Remember the glory days of VHS, when your local video store would stock a vast array of direct-to-video genre titles like Moon 44, Slipstream and Society? They were often not very good, but they often boasted the occasional stand-out performance, or clever idea, or innovative special effects. You had to give these films a lot of latitude: with low budgets and short production schedules they could never aspire to be as slick or watchable as a studio-backed theatrical release. For the right viewer in the best possible frame of mind, some of these direct-to-video films seemed genuinely great.

Split Second probably isn't entirely great. It is great, but it's also fairly awful. That's the thing about these kinds of films: they're great, and they're awful. They're both at once. This one has some pretty dreadful dialogue, and a lot of cliches in the plot, but it also has a wonderfully hammy central performance by the amazing Rutger Hauer (Blade Runner, Ladyhawke), a beautiful water-logged aesthetic, and a nice genre twist at the film's mid-point. There is no need to rush to see this movie, but at the same time if you ever get the chance it is worth checking out.

The film presents a future version of London - set in the then-futuristic 2008 - that has been partially flooded due to climate change. Everyone drives around in four-wheel drives or speedboats. Anybody walking the streets does so in knee-high boots. The water is everywhere: flooding the streets, pooling in corridors, dripping down walls. Health warnings posted on the sides of buildings or pinned onto notice boards warn of disease and infection risks. Any civilians we meet during the course of the film are predominantly punks and goths. It is a very British sort of near-future aesthetic, slightly exaggerated and stylised. It brings to mind memories of Max Headroom and 2000 AD.

Halfway through the film reveals that it isn't a near future serial killer movie, but actually a complete B-movie creature feature, with Hauer's improbably named Harley Stone forced to hunt down a confront a black, clawed, impossibly toothy monster in a flooded railway station. It's a really odd twist, and given that the climax was shot by a different director to the rest of the film (Tony Maylam for the most part, Ian Sharp for the end) I wonder if this was the original intention at all. It's certainly a bit of a surprise.

Hauer is clearly having a ball in black leather coat, Lennon sunglasses and permanently affixed cigar. It's a wonderfully indulgent performance that provides a lot of the movie's entertainment value. The supporting cast vary. Kim Catrall is reasonably solid as Stone's ex-girlfriend Michelle. I assume this film was shot soon after she completed work on Star Trek VI because her hair above her ears still hasn't entirely grown back. Neil Duncan struggles with the underwritten Dick Durkin. Pete Postlethwaite makes a surprise appearance as an antagonistic police officer at Stone's station house. This was pretty much his last performance before films like Alien 3, The Last of the Mohicans and In the Name of the Father made him a much better known actor.

This film really is a terrible one, but the setting and Hauer's performance also make it a tremendously enjoyable one. It would be the perfect guilty pleasure, if I felt enjoying a film ever required you to feel guilty. Instead I just think it's tremendously silly fun.
Posted by Grant at 7:52 AM